Sir Jeffrey Donaldson's weekly update for registered supporters. This was released on Saturday morning. Sign up here to receive yours. 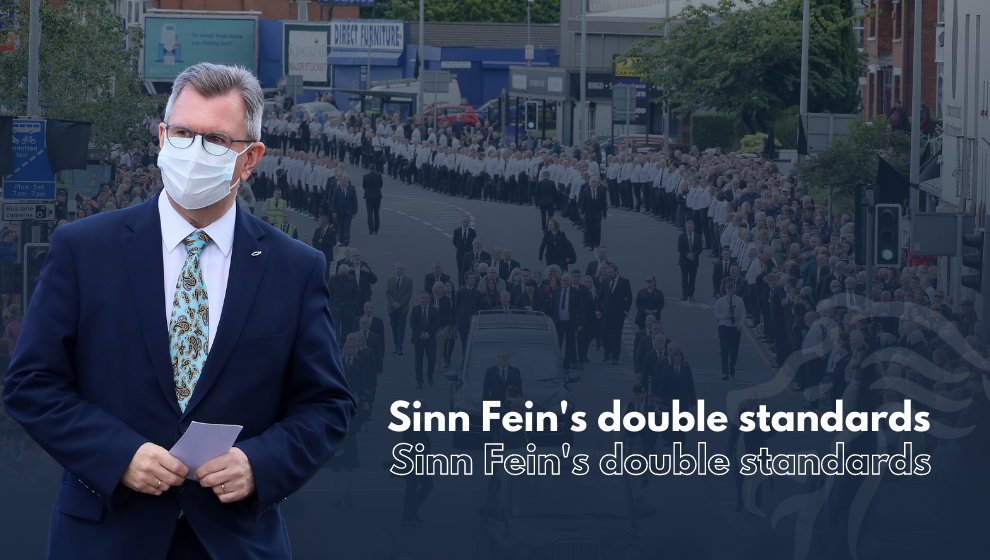 This week’s news was dominated by the Downing Street party story. I buried my dad in lockdown. No one was above the rules. Anyone breaking the rules was wrong. Our family had a covid compliant funeral despite us having a large extended family. It was tough when some of our family and close friends had to stay away from the funeral. That’s why I found Sinn Fein’s defence of bringing hundreds onto the streets for the Bobby Storey funeral to be grossly offensive.

Without a hint of embarrassment though, Sinn Fein rushed to microphones to criticise Boris Johnson. Gerry Adams, Michelle O’Neill, Gerry Kelly and Mary Lou McDonald tried to play the public for fools last year. One rule for them another rule for the rest of us. Let us never forget Sinn Fein’s ability to have double standards.

Last Tuesday, I met with Lord Frost, the UK negotiator on the NI Protocol, and on Wednesday, I was challenging the Prime Minister in the House of Commons about the lack of movement on the Irish Sea border being removed. Everyone else was asking him about parties but I was determined to focus his mind on restoring NI’s place in the UK. His answer was a standard reply with little sign of movement. That is not sustainable. I have given space for talks. I have been reasonable, but Brussels is being unreasonable. These talks cannot go on for years. The Prime Minister must realise that if there is no progress then, as I said, on 9 September our continued participation in political institutions that are being used to impose the protocol is not sustainable. The uncertainty is deeply damaging on so many levels.

On Friday, the UK’s negotiating team met with their counterparts in Brussels. It emerged from that meeting that the EU would legislate to permit medicines, with conditions, to flow from GB to NI.

Some will say that’s progress, but let’s just consider it. A foreign power is telling the UK government what medicines can and cannot enter this part of the United Kingdom. Products, such as medicines, that remain in Northern Ireland should not be subject to any checks. It is a scandal that there are any checks in the first place. A complete overreach by Brussels.

We re-entered the NI Assembly in January 2020 based on the New Decade New Approach agreement and within it a commitment from the UK government to restore NI’s place in the UK internal market. It is time for the Government to fulfil that commitment.

Another story in the headlines this week was about whether God Save the Queen should be our national anthem. My answer is yes it should but the Sinn Fein Culture Minister Deirdre Hargey wanted us to adopt the Republic of Ireland anthem as well. She told us;

“we have two main traditions . . . those traditions need to be reflected and respected in all of our spaces.”

This is the same woman who admitted to our North Down MLA Stephen Dunne that despite being the museums Minister, she didn’t authorise a single brass penny to be spent on Northern Ireland’s centenary. This is the same Sinn Fein who couldn’t allow a rose bush to be planted in Stormont grounds to mark the centenary of Northern Ireland. Sinn Fein talks about respect but to fail to respect anything that is precious to our British identity.

Health reform was also on the agenda this week. We had meetings almost every day across on the Party on the matter. I want to commend my colleagues Pam Cameron and Deborah Erskine who sit on the Health Committee. It is a massive brief. They worked hard this week on challenging the Department of Health approach on GPs and on the use of agency staff (keep your eyes on Monday’s media).

One of the calls they made was for GPs to publish how many patient contacts they have had each week. This data is already collected and sent to the Health and Social Care Board each Friday. Pam and Deborah secured the support of all the Parties on the Health Committee for the proposal.