Time for full facts on A6 fiasco: Campbell

East Londonderry MP Gregory Campbell has called for a public inquiry to establish the nature, extent and cost of the delays which have beset the A6 road dualling project. 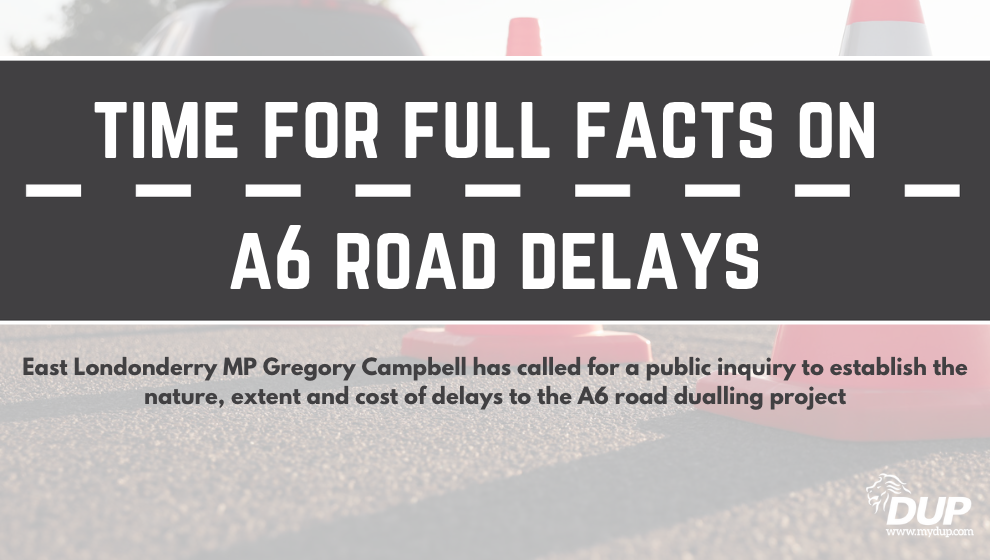 Describing the situation as “a fiasco” the DUP MP said,

“This project, when it is finally completed will be a tremendous asset, but as of today it is an embarrassment. It is time that we learned the full facts about what has happened.

When construction first commenced, we were told the completion date would be Spring 2022. Having made inquiries, I was informed that the Covid pandemic and associated restrictions would not have an impact on that completion date. When the deadline had been missed the then Minister Nichola Mallon visited the site but gave no explanation or apology. Instead, she reported “good progress” when the road should already have been finished.

I made further inquiries from the most recent Minister John O’Dowd who said it would be finished “before the end of the year”. That will be another missed deadline and its time we not only got the road finished but found out what is behind these inordinate delays.

Everyone understands that projects can face delays, and there may be contractual issues at play with this project. However, what is necessary now is to establish what has been behind these delays, the extent of any contractual issues that have caused them and how much cost the public purse will have to bear because of them.

There has been a lack of transparency and openness from the Department throughout this process yet motorists are still stuck on a single lane carriageway with speed and overtaking restrictions in place. More importantly however, there are road safety concerns with drivers on poorly marked sections of road.

We need the road opened as well as having openness from the Department about this fiasco.”