Tackling cost of living crisis must include tackling NI Protocol

DUP MP Gavin Robinson has said that any serious discussion on tackling the cost of living crisis in Northern Ireland cannot ignore the impact of the Northern Ireland Protocol in driving up household bills here. 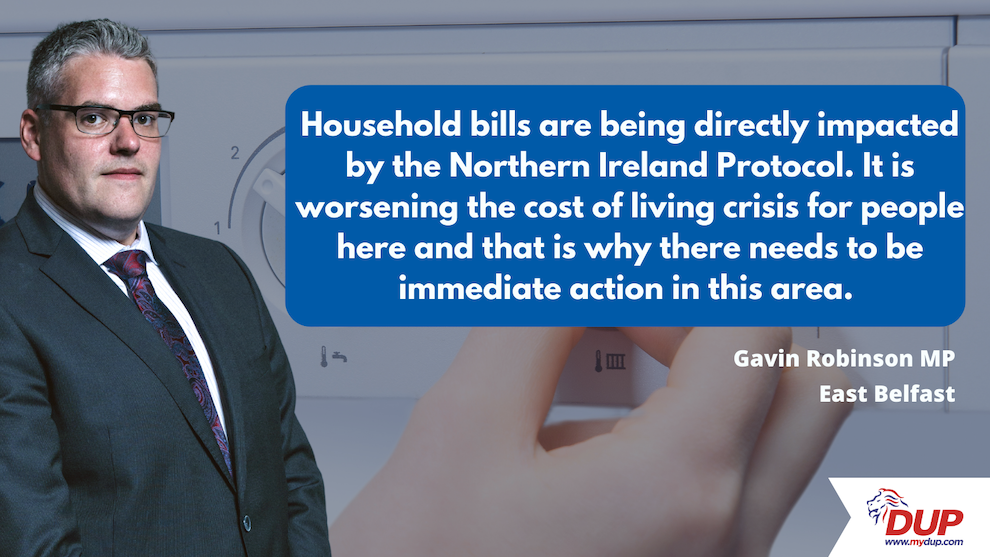 “Every single household across the United Kingdom is impacted by the current cost of living crisis. The scale of the challenge means that only the Treasury has the capacity and the powers to make a real and meaningful difference. Local actions may be helpful, but Ministers here simply do not have access to the necessary fiscal and economic levers needed to make that difference.

The imposition of 25% tariffs on steel may seem remote to households, but those are increasing the cost of construction in Northern Ireland and the cost of doing business. We also know that the Protocol has increased transport costs for goods being brought to Northern Ireland from Great Britain. Those costs don’t just evaporate, but are passed to consumers through higher bills for goods and services.

The Protocol ties Northern Ireland to the EU’s VAT regime and we already know that previous measures to boost energy efficiency measures could not be applied to Northern Ireland because of this. The Protocol hampers the ability to take action on energy bills in all parts of the United Kingdom.

We know that the Health Minister still has concerns around the future of medicine supply here. However, there is also significant uncertainty on the supply of animal medicine after the end of this year. That will further feed into higher costs of production for our agri-food sector and thus to even higher food prices.

The Northern Ireland Protocol is more than some petty argument. It is having a real and direct impact on rising bills and the struggles faced by households.”