DUP South Antrim MLA Pam Cameron has said the threat to the supply of medicines in Northern Ireland continues to loom large as a result of the Protocol. 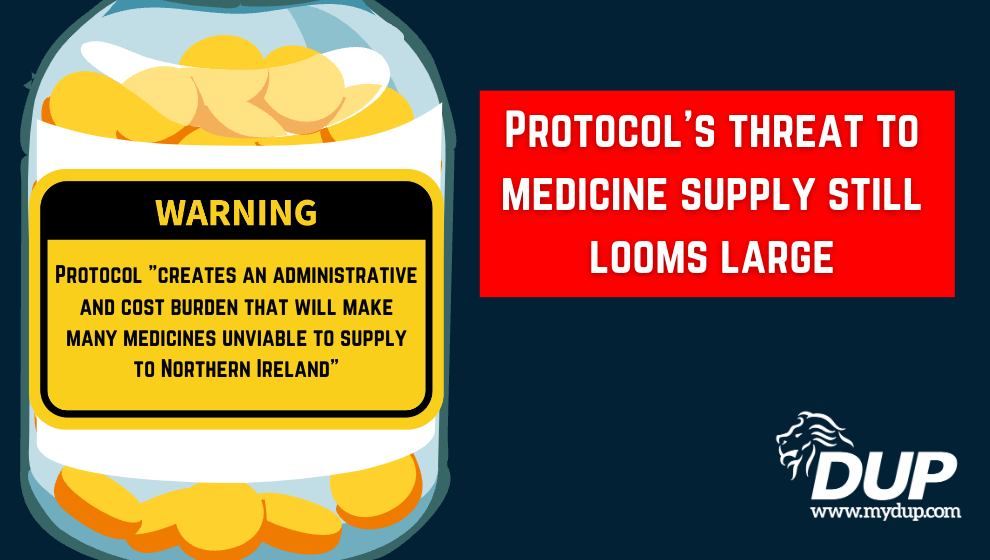 Responding to formal evidence provided by one major pharmaceutical company, Teva UK, which confirmed that there are ‘current’ and ‘significant’ challenges to sourcing some products from Great Britain, Mrs Cameron said:

‘‘The vast majority of local medicines are supplied from Great Britain.

By foisting new and demanding requirements on how these products are authorised for use in Northern Ireland, the Protocol is placing future supply in jeopardy and causing deep uncertainty for patients and our health service.

The warning presented by Teva UK is stark. They say need for two product licences under the Centralised Procedure ‘‘creates an administrative and cost burden that will make many medicines unviable to supply to NI.’’

However they are not alone in holding these concerns.

In separate evidence, the NHS Confederation warned that the temporary EU legislation will expire at the end of 2024, ‘creating future uncertainty.’ PAGB, the UK trade association for manufacturers of over-the-counter medicines, also expressed concern about the ‘level of certification needed to supply food supplements’ to our Province.

This level of disruption is unacceptable and unjustifiable.

Those parties who were tripping over each other to praise the EU for allowing medicines to move within our own country need to accept that the Protocol’s problems have not been resolved. Rather than downplaying the impact it is having, they should join with us and others in calling for these provisions to be scrapped.

The reality is that Brussels should never have been allowed to use people’s health as political leverage. Medicines should not have been part of the Protocol and their unfettered supply in the future will be a crucial test of whether any Government outcome, either by negotiation or legislation, is capable of restoring Northern Ireland’s economic and constitutional position within the United Kingdom.’’