EU should focus on solutions rather than sanctions: Dodds

DUP Upper Bann MLA Diane Dodds has said the European Union should focus on replacing the Northern Ireland Protocol with arrangements that unionists and nationalists can support rather than brandishing threats of sanction. 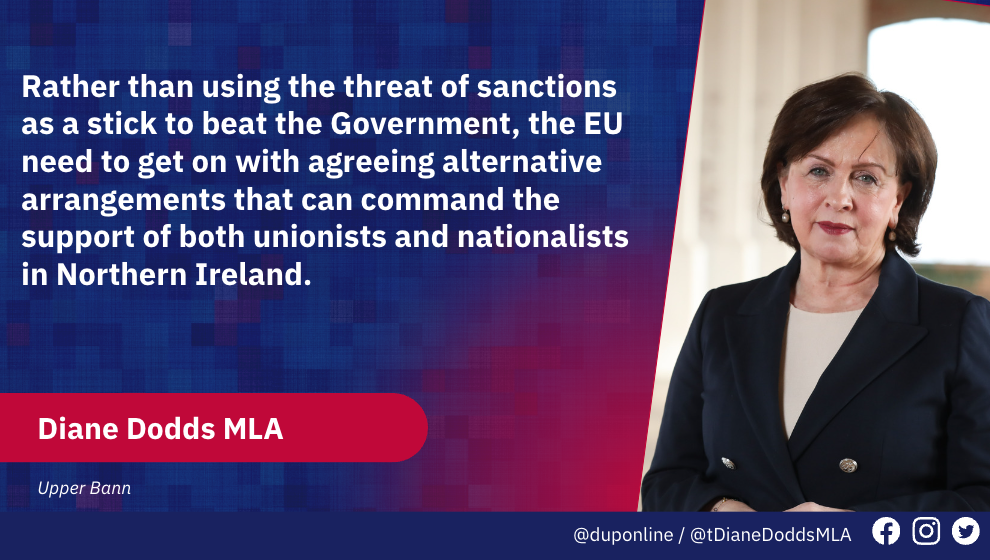 On Wednesday the European Council and Parliament agreed plans to restrict trade with the UK for a failure to comply with the Protocol and earlier today European Commission President Ursula von der Leyen was speaking in Dublin.

“The EU is failing to recognise the concerns of Unionists. Despite the Protocol driving up the cost of doing business, hindering the supply of medicines and preventing the devolved institutions from functioning, Brussels refuses to face the reality that the very arrangements it insisted upon are undermining political and economic stability in Northern Ireland.

For weeks we have been told the mood music is good and that talks have been constructive. Yet the EU seems to be focused on punishing the UK for having the audacity to protect the integrity of its internal market. The hypocrisy is staggering. Let’s not forget that it was the EU that moved to trigger Article 16 to stop the supply of vaccines during the pandemic.

Rather than using the threat of sanctions as a stick to beat the Government, the EU need to get on with agreeing alternative arrangements that can command the support of both unionists and nationalists in Northern Ireland. Any solution must restore the consent principle at the heart of the Belfast and St Andrew’s Agreements. Not a single Unionist MP or MLA supports the Protocol. Without a return to consensus politics the future of devolution will remain on life-support.

It is crucial that the Government hold their nerve in the face of this aggression but most of all there is a need for decisive action. An antidote for the poison the Protocol has injected into our politics is found in the Protocol Bill. Ministers must not shy away from taking the necessary steps to bring matters to a head and finally restore Northern Ireland’s place in the United Kingdom.’’