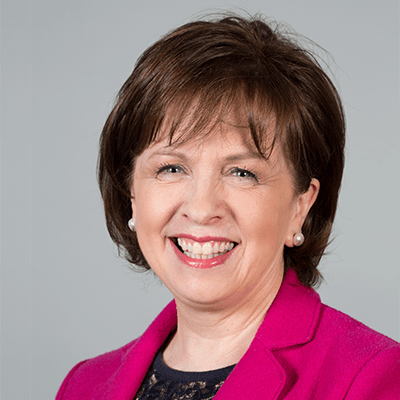 Diane was brought up on a small family farm outside Rathfriland. Educated at Annaclone Primary School and then Banbridge Academy, Diane graduated in History and English from Queen's University, where she joined the Democratic Unionist Party

She qualified as a teacher from Stranmillis College, taking up a teaching post at Laurelhill High School in Lisburn where she taught History and English as well as pupils with learning difficulties.

In the 2003 Assembly election Diane became the first Unionist to win a seat in West Belfast for over 20 years. Diane was elected to Belfast City Council in 2005 with the highest individual vote of any candidate across Northern Ireland.

Diane was elected as DUP MEP for Northern Ireland in June 2009, a position she retained in the 2014 and 2019 European Elections. Although unaffiliated to any groupings in Brussels, Diane served on the Conference of Presidents and secured full membership of the EU Agriculture and Rural Development Committee and also representation on the EU Fisheries Committee.

In 2020, Diane returned to the Northern Ireland Assembly as MLA for Upper Bann and served as Minister for the Economy from January 2020 until June 2021.

Protocol is holding back devolution: Dodds

EU should focus on solutions rather than sanctions: Dodds