North Belfast MLA Phillip Brett has said that unless the Northern Ireland Protocol is replaced with arrangements that can be supported by all communities the 25th anniversary of the Belfast Agreement will come and go without a functioning government at Stormont. 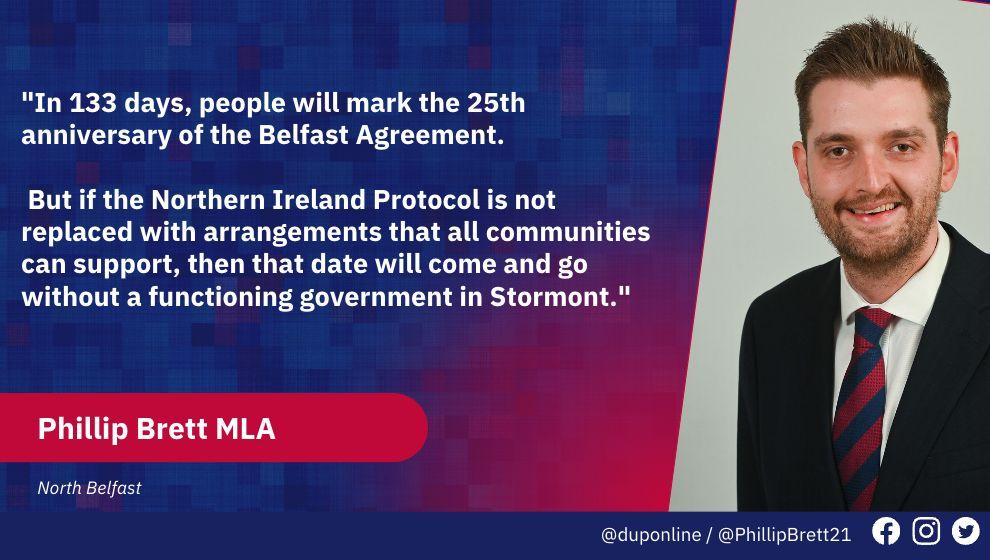 On the Northern Ireland Protocol he said,

“For me, the greatest lesson we can all learn from the last 100 years, is that political progress is only ever achieved when all communities move forward together.

In 133 days, people in London, Belfast, Dubin and Washington will mark the 25th anniversary of the Belfast Agreement.

I do not say that gladly or as a threat, but as a factual reality that must serve as a wake-up call to us all to find an immediate resolution to the crisis we face and ensure a return to the politics of consensus.

Unionism has not, and unionism will not give its consent to the Northern Ireland Protocol.”

On Sinn Fein he said,

“Although we will not always agree in our interpretation of the past and our aspirations for the future, we should be all united in the view that nether the Republic of Ireland or Northern Ireland are best served by leaders who will not condemn IRA violence. That simply confuses the next generation.

There is an obvious attempt to ‘normalise’ the outrageous which cannot be allowed to succeed. Sinn Fein lead these attempts because they are not a normal political party. It is funded by foreign money, runs its social media account from Serbia and has numerous internal bullying accusations.

If that isn’t enough there are also some serious questions for Sinn Fein to answer about the party’s connection to Dublin gangsters.”