Victims of Michael Watt must be focus following report

DUP South Antrim MLA Pam Cameron has described the findings of the expert review of clinical records relating to 44 deceased patients who had been under the care of former consultant neurologist Michael Watt as harrowing. 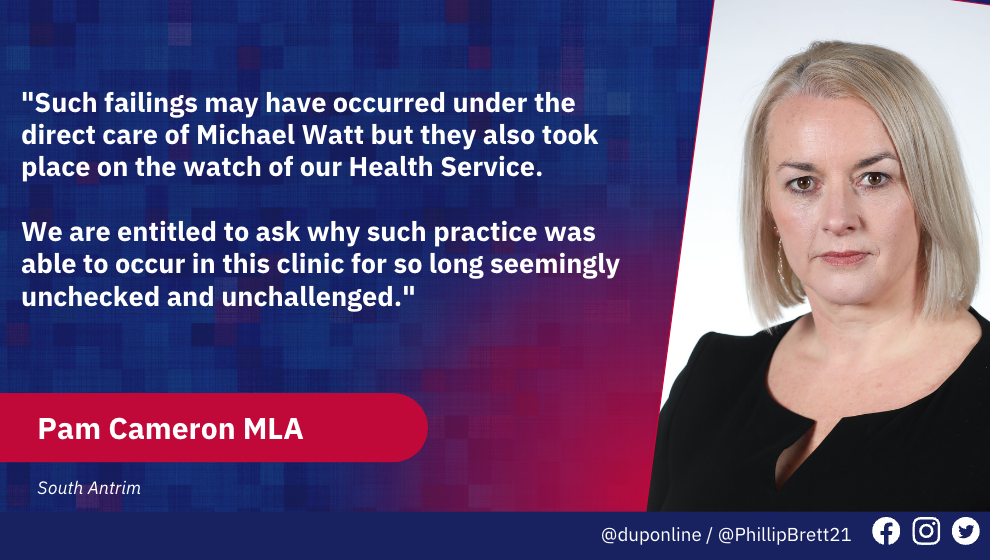 The review, which was commissioned by the Regulation and Quality Improvement Authority (RQIA), found significant failings, including a lack of proper clinical investigation, inaccurate diagnosis, inappropriate treatment and poor communication with families. Across both cohorts, only two cases were found to have represented good practice.

Commenting after attending a protest in Belfast by those patients and relatives affected by Dr Watt's actions on Tuesday morning, Mrs Cameron said:

‘‘My thoughts today are first and foremost with the bereaved families for whom the publication of this report will be deeply distressing.

The findings of this review will shock many both in their scope and seriousness. They are the antithesis of what our NHS stands for. In a majority of cases the quality of care fell below expected standards and diagnoses were not secure. This caused significant harm to those affected and was exacerbated by a lack of openness with patients and families, including about outpatient letters.

Such failings may have occurred under the direct care of Michael Watt but they also took place on the watch of our Health Service. We are entitled to ask why such practice was able to occur in this clinic for so long seemingly unchecked and unchallenged.

It is clear from speaking with victims and bereaved families that there is a need for a bespoke wraparound care for those left traumatised. Some are even afraid to enter their GP surgery or hospital buildings such is the fear and distress caused by their experiences. This needs to be addressed and I will be urging Trusts and the Department of Health to ensure they access the tailored support they need going forward.''

''We owe it to those who continue to be impacted by the neurology recall, and those who bear the harrowing consequences of failure in our health system most acutely, to take steps to ensure it never happens again.

Today’s review concludes that ‘‘these are issues, not only for neurology services, but throughout the health and social care system.’’ It is crucial that there is a whole-system approach to implementing the recommendations contained in today’s report. The bulk of our clinicians and health staff are honouring their duty of care and must be practically supported. However, the minority who are failing to deliver on expected standards of care must be identified and dealt with earlier in the interests of patient safety. This means putting in place robust safeguards to prevent such destructive poor practice in the future.”