“Unionism is at its strongest when we stand together.” Donaldson

DUP Leader Sir Jeffrey Donaldson MP has commended the Orange Order for opening the doors of Orange Halls this Saturday, to facilitate the signing of their anti-Protocol Declaration. 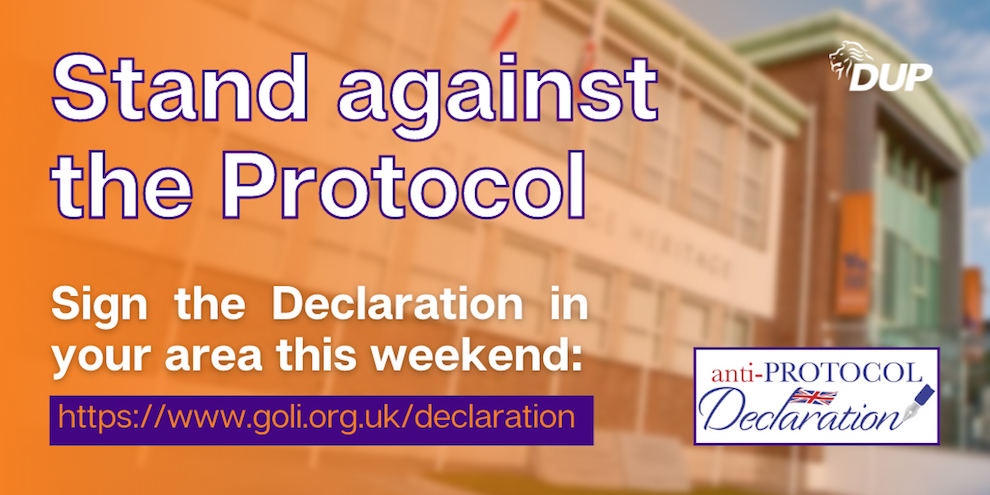 Sir Jeffrey is encouraging Unionists from across Northern Ireland to come together in united opposition, by signing the anti-Protocol Declaration at their local Orange Hall.

“This weekend, Unionists from across Northern Ireland have the opportunity to show their strong, united and unwavering opposition to the Northern Ireland Protocol by adding their name to the Grand Lodge of Ireland’s anti-Protocol Declaration.

All Unionists should use the opportunity to send a clear and resounding message to Brussels.

The Northern Ireland Protocol runs contrary to the principle of consent and is opposed by every single elected representative of the Unionist community.

I wish to pay tribute to the Orange Order for their role in ensuring the sustained and democratic opposition of the Unionist community to the Protocol.

Unionism is at its strongest when we stand together. This weekend I encourage Unionists of all shades to stand together once again to send a clear and unambiguous message, that a border in the Irish Sea will never be acceptable.”