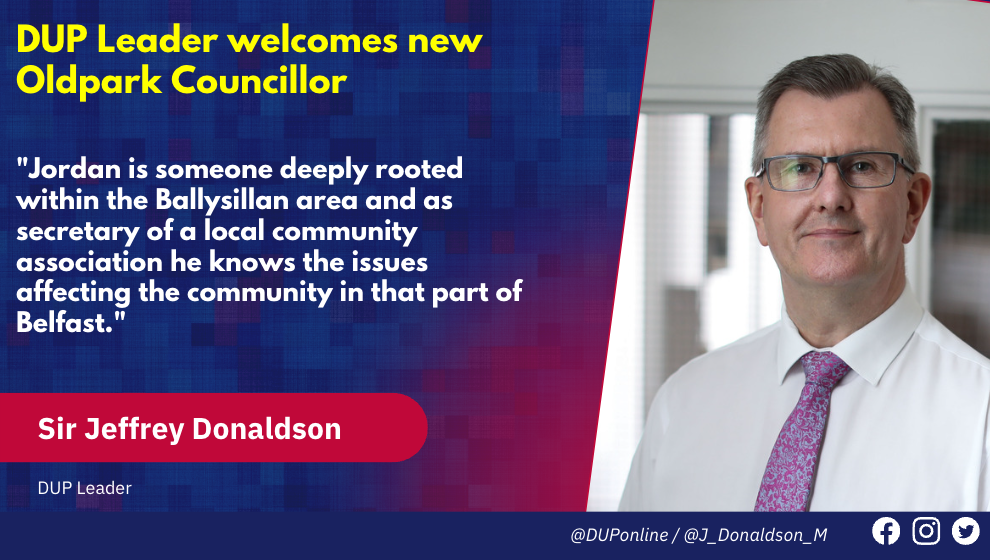 The announcement follows a vacancy created when Dale Pankhurst stepped down from Council.

Sir Jeffrey said, “I am delighted that Jordan will be the new DUP Councillor for Oldpark. He will continue to provide enthusiastic and dedicated representation for the area just as Dale has done since being elected.

Jordan is someone deeply rooted within the Ballysillan area and as secretary of a local community association he knows the issues affecting the community in that part of Belfast. Jordan has previously been a member of the TUV and stood for election for that party. He represents one of many unionists who are uniting behind the DUP banner as the strongest and most effective voice to promote and strengthen Northern Ireland’s place within the United Kingdom. I am committed to working with all unionists to ensure Northern Ireland keeps moving forward.

I know Jordan will be an important part of the DUP team on Belfast City Council and within the Party more widely.”

Cllr Doran added, “It is an honour to have been selected to represent the people of Oldpark as their DUP councillor. I will be a strong and pro-active unionist voice for the people of this area and look forward to working as part of a strong DUP team on Council to deliver for all the people of Belfast.

I want to see a stronger and more cohesive unionism and the DUP is the only party which an achieve this, not only in North Belfast, but across Northern Ireland.”