Speaking in London, DUP Leader Sir Jeffrey Donaldson MP has said that the last 24 hours have been unprecedented but whilst the personnel in Downing Street may change, the NI Protocol is still undermining the foundations of devolved government in Stormont and must be replaced. 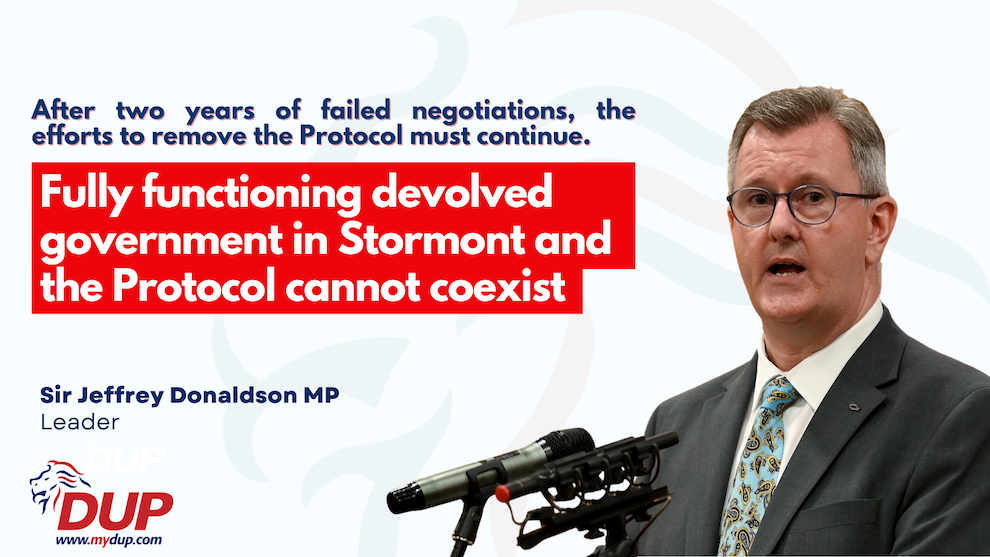 “An incoming leader of the Conservative Party and Prime Minister will face very significant challenges both at home and abroad.

I recognise the efforts made by the outgoing Prime Minister Boris Johnson and his team to replace the Northern Ireland Protocol with arrangements which can command the support of unionists as well as nationalists. It is no secret that we believed that Boris Johnson had a duty to get rid of the Irish Sea border having disastrously gone against our advice and signed a Withdrawal Agreement containing the Protocol. After two years of failed negotiations, the efforts to remove the Protocol must continue.

Stable devolved government can only be built on a solid foundation. With zero unionist support in the Assembly, the NI Protocol has been undermining the foundations rather than underpinning them.

The leadership of the Conservative and Unionist Party is a matter for the MPs and members of that Party. They should however recognise that no unionist MLAs or MPs support the Protocol. Fully functioning devolved government in Stormont and the Protocol cannot coexist.”