Sammy Wilson MP’s bid to ban imports of hunting trophies has won the backing of some of Britain’s best-loved public figures. 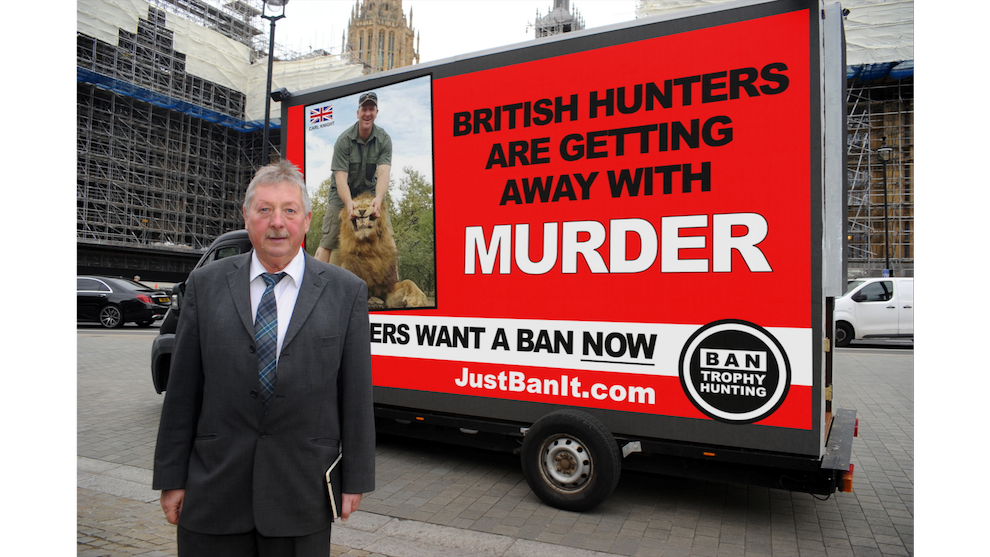 Joanna Lumley and Downton Abbey star Peter Egan were among those to express their support for Sammy Wilson MP.

Joanna Lumley said: “Sammy Wilson MP is representing the 9 in 10 voters who want to see an end to this barbaric, cruel industry. It should have been abolished long ago. What sort of world do we live in where endangered animals can be killed for thrills by British trophy hunters? It is the height of cowardice. Sammy Wilson MP has my full support for this campaign.”

Peter Egan added: “I applaud Sammy Wilson MP’s courageous campaign. The American gun lobby is fighting efforts to ban this evil ‘sport’ because it says hunters’ ‘rights’ should be protected. But what about the innocent, defenceless animals that are killed by British trophy hunters every year just for kicks? Sammy Wilson MP is absolutely right to stand up to the industry lobbyists and to speak up for voiceless animals.”

The law currently allows British trophy hunters to bring their ‘trophies’ – including animals’ heads and bodies – back into the country to display in their homes.

Opinion polls show that almost 9 in 10 voters support a ban. A recent report by a cross-party committee of MPs and Lords says that elephants are the most popular trophy animal shot by British hunters. Many British hunters go to Africa to shoot ‘canned’ lions – animals bred in captivity and shot within fenced enclosures. British trophy hunters also shoot seals, otters and wild cats, according to UN figures.

Sammy Wilson MP said: “The whole idea of going out into the wild and hunting down magnificent wild animals for the sake of man’s vanity is obscene. The argument that trophy hunting supports the local economies of some of the poorest countries in the world is simply untrue and is a cover for illegal poachers. It is time for the Government to wake up and ban the import of such trophies into the UK.”

UK firms are hosting trophy hunting ‘holidays’ where people can shoot cheetahs, leopards and rhinos, according to the Campaign to Ban Trophy Hunting which also says that US-based gun rights groups are lobbying Ministers in an attempt to block a British ban on trophies. Safari Club International hands out prizes to trophy hunters who shoot over 100 different species around the world.

Eduardo Goncalves of the Campaign to Ban Trophy Hunting said: “Many people are shocked to learn trophy hunting still goes on. They are even more shocked to learn that British people are involved and that it’s not just Americans who shoot lions for so-called ‘sport’, selfies and souvenirs. Sammy Wilson MP is absolutely right to be reflecting local people’s views on this issue. Trophy hunting is opposed by the vast majority of local constituents.”