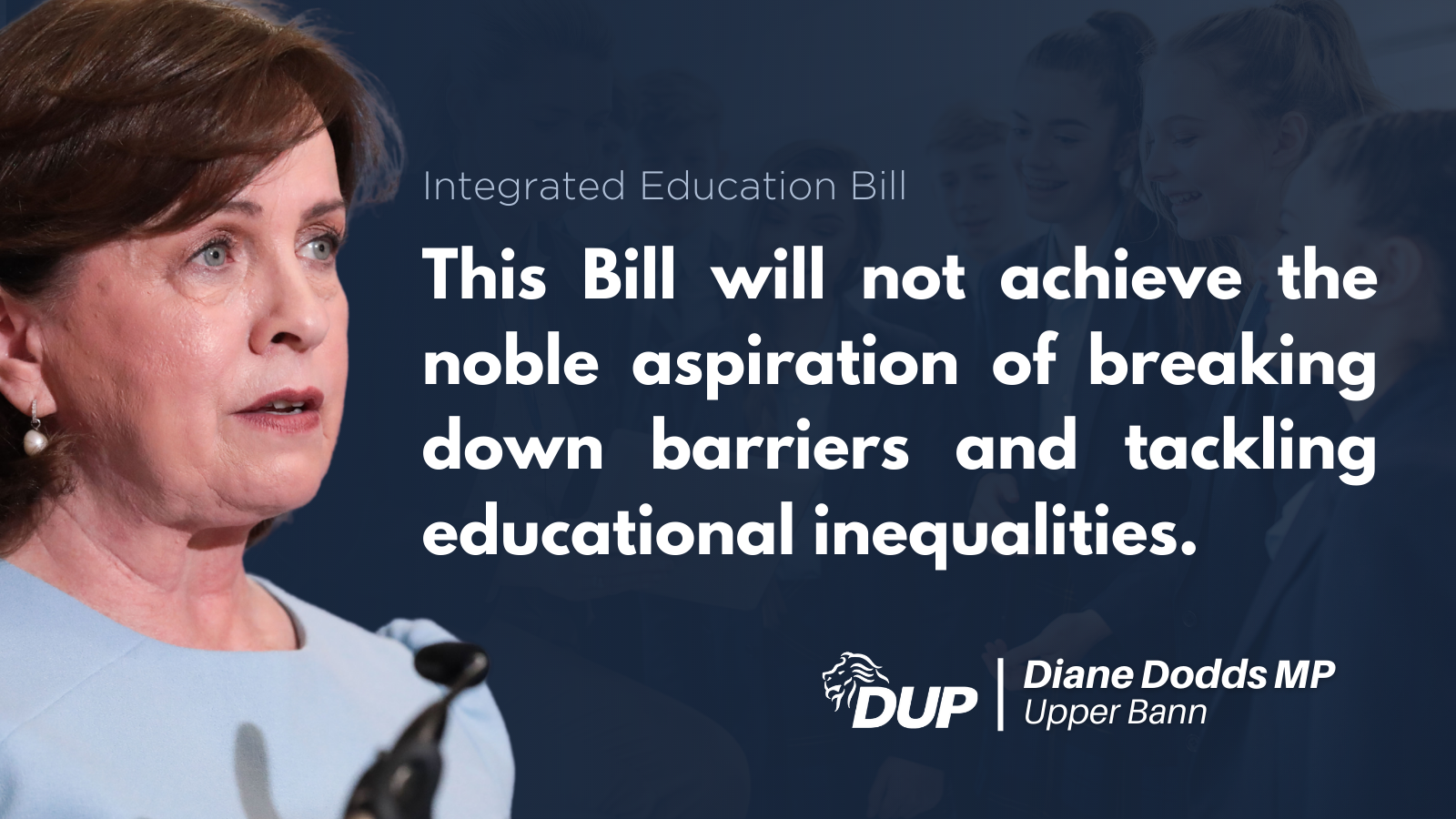 "The vast majority of people in Northern Ireland will all agree that the concept of our children growing up together, playing together and being educated together is something that we can all support. We all want to break down division in our schools. I am thankful that I and my children experienced education through attending a school where everyone is welcome regardless of background or faith and this philosophy and practice can be found throughout the education system.

There have been many claims made about the Integrated Education Bill however what is very clear is that this bill will not achieve the noble aspiration of breaking down barriers and tackling educational inequalities. Indeed, having sat through the whole of the evidence sessions in the Education Committee, it is clear from supporters of the bill, that it is designed to further one part of the system only.

This Alliance Party Bill is rushed and by the admission of the proposer has no recent consultation process to back up its aims, objectives and the new duties it will place on the Department for Education on behalf of the Integrated sector. To make one of the most fundamental changes in education in two generations should be scrutinised and debated with sobriety and diligence not hurried at breakneck speed. The proper forum for such change is through the Independent Review of Education.

The four main sectors in Northern Ireland are the Controlled, Maintained, Integrated and Irish Medium - essentially, outside of these sectors, sit the Voluntary Grammars. At the moment, schools that are designated as 'Integrated' have an extra duty applied to them, Article 64 of the 1989 Order states, ‘It shall be the duty of the Department (of Education) to encourage and facilitate the development of integrated education…’ a similar duty is then applied to the Irish Medium Sector by way of the 1998 Order. In essence these two sectors now already enjoy a special privilege not extended to other schools. This Bill, if passed, will create effectively a three-tier education system. It will see the Integrated sector elevated to the top, Irish Medium in the middle and Controlled/Maintained schools at the bottom.

Clauses four & five of the Bill will ultimately mean that the Department of Education will have to either 'promote' or 'support' Integrated education in a way that no other sector enjoys. Clause 8 of the Bill places a duty on the department to publish a strategy for the Integrated sector which includes identifying “funding commitments and resources for the promotion (support) and provision of integrated education.” This will mean that the Department of Education will have to prioritise one sector over all others. This is unfair and unreasonable. My local controlled school should not be deprived of a new build just because it is not in the Integrated sector even though its pupils come from all faiths and none.

Sinn Fein, the SDLP and the Ulster Unionists all spoke against this legislation in July when it was first before the Assembly and indeed in some cases were very critical of the Bill’s inadequacies and implications for the other sectors. Then, incredibly, they all voted in support of it and have supported it ever since. The DUP was the only Executive Party to speak up and oppose it to give voice to those of all faiths and none who attend schools in the Controlled, Maintained or Voluntary Grammar sectors. We know that some 92% of our children are educated within these sectors, they are the ones who will lose out of if MLAs do not step up and give them a voice.

Our children deserve much more that political parties playing election games with their future."