East Belfast MP Gavin Robinson has welcomed guidance sent to stakeholders in the Education sector alerting them to the passage of the Armed Forces Covenant Act. 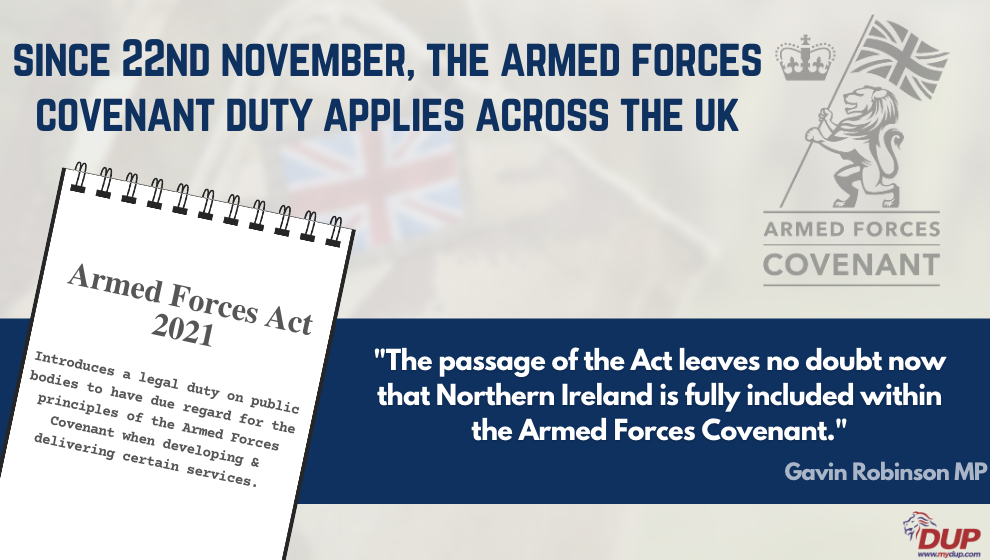 The DUP MP said, “The Act fulfils a commitment that we secured in the New Decade New Approach agreement that there should be statutory underpinning of the Armed Forces Covenant on a UK-wide basis. Its inclusion within NDNA followed a Private Members Bill which I brought before Parliament back in February 2019.

Sadly, there had been attempts to block the implementation of the covenant, with some even trying to deny that it applied here. It was these actions which motivated my initial attempt to see the Covenant enshrined in law. The passage of the Act leaves no doubt now that Northern Ireland is fully included within the Covenant.

The Covenant doesn’t provide any unfair advantage to veterans, it merely ensures those who serve in the Armed Forces, both regular and Reserve, veterans and their families should face no disadvantage compared to other citizens.

Whilst the legislation currently covers areas of health, education and housing, there is scope for further areas to be added, and I would hope that it can be extended in the future to areas including employment, pensions, criminal justice and social care.

The guidance sent by the Department of Education is a useful reminder to all areas of that sector following the Covenant Duty coming into force on 22nd of November. I would hope that other Departments impacted by it in Northern Ireland will take similar action.”