Writing in today's Belfast Telegraph, East Antrim MLA Gordon Lyons has set out the last minute change introduced by Ministers in London which means energy payments to households in Northern Ireland are being withheld. 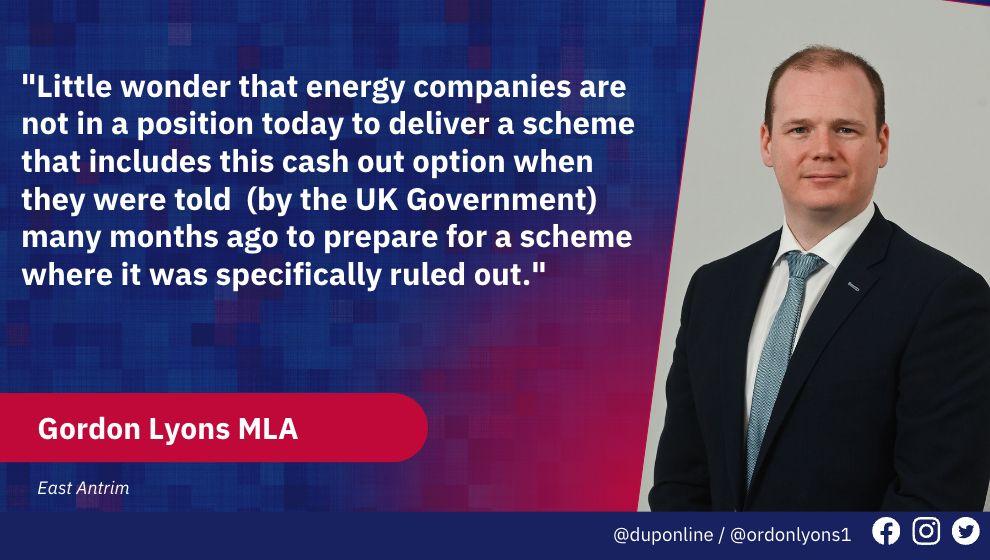 Much has been made about references that the £400 (now increased to £600) energy support payment would be paid in November or at least before Christmas. These were not dates of our invention, but the words of the then Chancellor and Prime Minister. They also were not some whispered promise to the DUP out of the public gaze. They were comments made in public by the Chancellor in August and reported in this very newspaper.

On 10th August 2022 the Belfast Telegraph reported an interview by the Chancellor on BBC Northern Ireland’s Good Morning Ulster programme. A quotation by Mr Zahawi was included where he said:“The £400 will begin to drop, in the autumn”.

There may be some debate about exactly what might constitute 'autumn’, but most people would accept that autumn falls before Christmas in the calendar year.

It wasn’t just DUP representatives who referenced payments in this timescale. On 26th August the Belfast Telegraph reported comments where the Utility Regulator said they had hopes people here would see the £400 payment “this side of Christmas”.

Energy support payments could and should have been delivered to households here before the end of November. There was nothing preventing that from happening save for a lack of political will in London. The funding is in place, the systems are in place and the energy companies are ready to process the payment as outlined by the then Chancellor in August.

Instead however, Ministers in London decided within the last few weeks to insert the so-called “cash out” option whereby customers could withdraw some or all of the payment from their electricity provider if their account is in credit. That is an entirely legitimate and useful mechanism, particularly in Northern Ireland where we have a high dependency on oil and other fuel sources. It was also an entirely legitimate and useful mechanism during the summer when it was ruled out as an option by the UK Government.

Little wonder that energy companies are not in a position today to deliver a scheme that includes this cash out option when they were told many months ago to prepare for a scheme where it was specifically ruled out.

For Ministers to re-introduce something like this at the last minute looks to most people like nothing more than a delaying tactic. It is most disgraceful because it is dressed up in some cloak of kindness. It is entirely cynical to introduce measures at this late stage to actively delay the scheme.

It's not “empty promises” from the Tories in August that should be of most concern, it’s the callous actions in October and November which will likely mean that some people in Northern Ireland suffer a cold Christmas, because Ministers in London decided to withhold payments from people who need that money transferred immediately.

If this is a further act to punish the DUP for demanding the Government and Brussels replace the NI Protocol with arrangements acceptable to unionists, then it is an outrageous abuse of power and hurts the most vulnerable.