DUP South Antrim MLA Pam Cameron has described the findings of a new academic report examining the impact of the NI Protocol on the supply of medicines from Great Britain to Northern Ireland as deeply alarming. 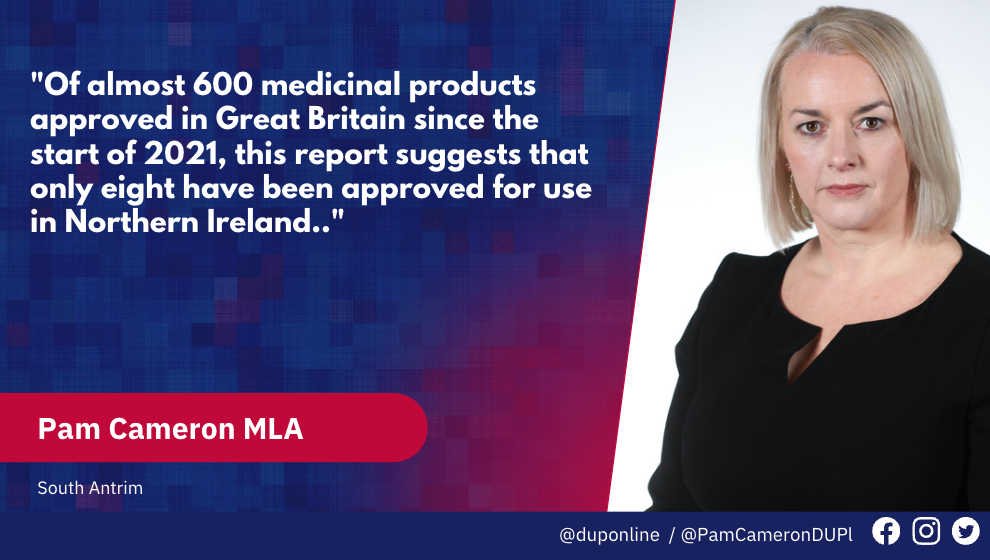 The report by health think tank, The Nuffield Trust, has found that the number of medicines now available in Scotland, England and Wales but not Northern Ireland is likely well into triple figures.

“Sinn Fein, the Alliance Party and the SDLP all championed the “rigorous implementation” of the Protocol, including its grip on medicines. They should now recognise the Protocol is bad for Northern Ireland on a number of levels including health.

Incredibly, of almost 600 medicinal products approved in Great Britain since the start of 2021, this report suggests that only eight have been approved for use in Northern Ireland under the same name and company and only a minority have been approved under the separate EU requirements our Province must follow. This represents a serious divergence in the availability of medicines for patients and health and social care in different parts of our United Kingdom.

These practical concerns are not likely to dissipate. Manufacturers are legally required to notify the authorities if there is likely to be a shortage of a product, or if it is going to be discontinued. There were 750 such notifications in the UK in the first five months of last year - despite the EU’s temporary legislation taking effect and being presented as a panacea by pro-Protocol parties.

This scale of disruption must be addressed once and for all. Northern Ireland deserves a lasting solution rather than sticking plasters. Of course, the situation on medicines is only a symptom of the wider problem that the Protocol is bad for Northern Ireland.

Only arrangements that replace the Protocol and command the support of both unionists and nationalists can succeed in breaking the current impasse and providing a durable basis for the restoration of power-sharing.’’