Forsythe – NI childcare costs on a par with central London

DUP South Down MLA Diane Forsythe & Sammy Wilson MP have written to the Chancellor and outlined the need for Treasury to adjust the allowance for Tax Free Childcare across the UK after a report finds that childcare costs in Northern Ireland are on a par with London and are holding back working families. 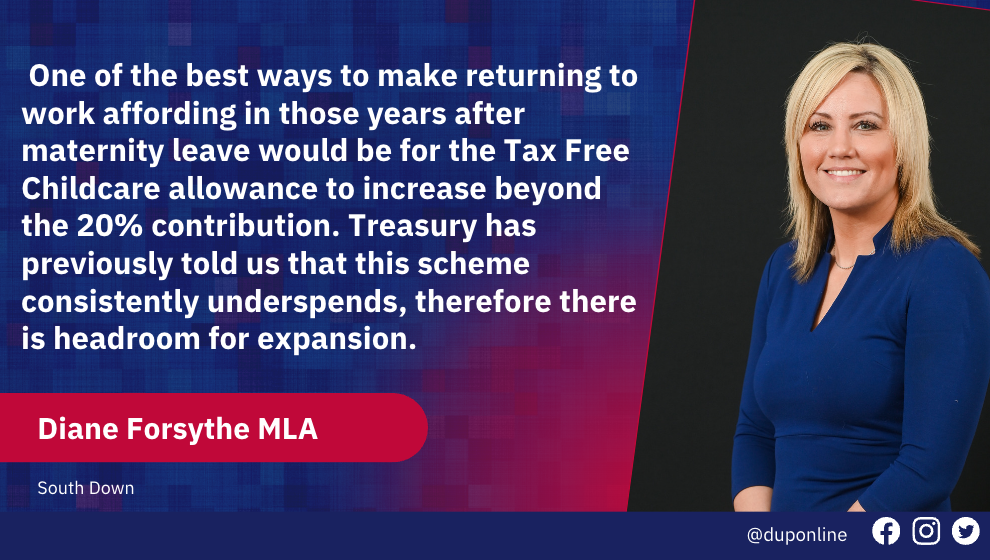 Whilst this report finds in England mortgage, household energy and household food costs are higher than childcare, that is not the situation in Northern Ireland. Families here regularly report that childcare is their biggest monthly cost and significantly more than their mortgage payment.

Our Treasury spokesman in Westminster Sammy Wilson and I have written jointly to the Chancellor and urged him to look at increasing the Tax Free Childcare allowance for working families. This would help get more people into the workforce and particularly in our public services such as schools and hospitals where it is simply not affordable for a parent to work.

The DUP Education Minister before leaving office had set the wheels in motion to ensure all children aged 3-4 have access to a minimum of 22.5 hours of funded pre-school education per week and that is a work in progress. One of the best ways however, to make returning to work affording in those years after maternity leave would be for the Tax Free Childcare allowance to increase beyond the 20% contribution. Treasury has previously told us that this scheme consistently underspends, therefore there is headroom for expansion.”