DUP Fermanagh and South Tyrone MLA Deborah Erskine and Enniskillen Cllr Keith Elliott have condemned those responsible for erecting republican posters at Enniskillen War Memorial and across the town. 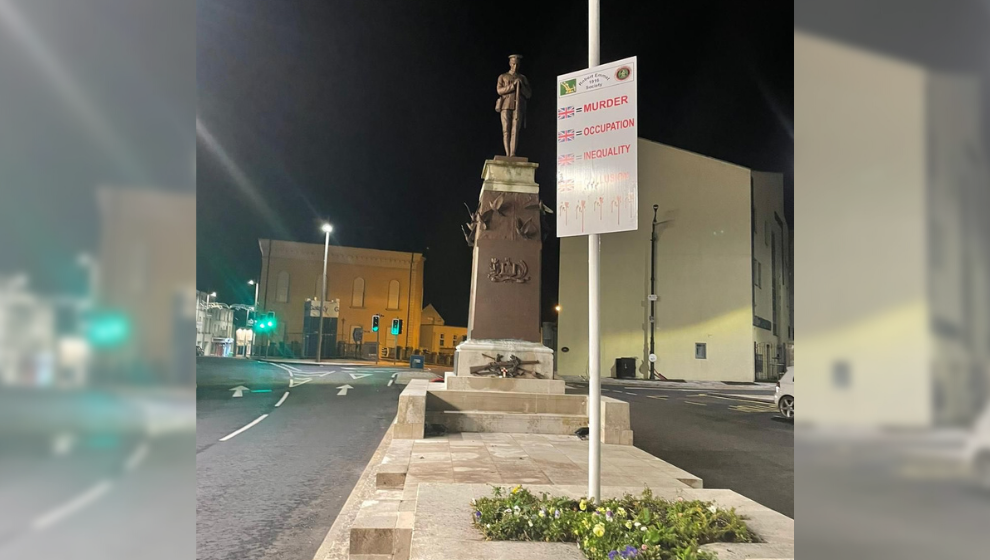 “It is disgraceful that a republican poster was placed on Enniskillen war memorial last night. For an organisation to erect these posters ahead of the acts of remembrance takes a special kind of twisted nature. They should front up and explain their need to be so insensitive and offensive.

It was a deliberate act on the eve of Armistice Day. It was designed to offend. When this war memorial was unveiled in 1922, the first wreaths were laid by Protestant and Catholic orphans. It is those parents, who came from all faiths and none, that we remember, yet the people behind this poster, just endeavoured to cause hurt.

I welcome the swift action by the police and their decision to investigate this as a hate crime. Anyone around Enniskillen who witnessed this poster being erected at the war memorial should get in touch with the police.

Raising tensions and causing division is not what the people of Fermanagh and South Tyrone want. Those responsible are in the minority and always will be. Their sick agenda has no support.”

Cllr Keith Elliott added, “I thank those who ensured this particular poster was taken down quickly. However, this republican organisation erected posters across the town.

We do not want this behaviour in Enniskillen. Nobody wants to see community relations damaged.”