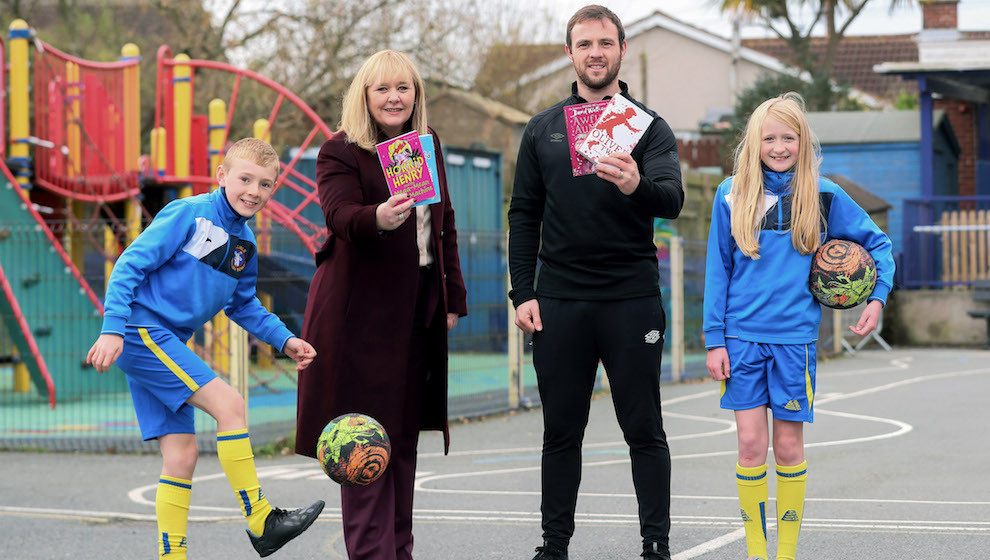 The scheme has two main elements, reading and football. As a reward for reaching a reading word count target, pupils involved in the programme get to take part in a weekly football coaching session with local football star and Linfield FC captain, Jamie Mulgrew.

Speaking during a coaching session at the Millisle Primary School, the Minister said: “This is a simple and effective programme designed to get children engaged in reading. Programmes like this help to address the long-standing issues associated with educational underachievement, including encouraging pupils to read. This is one example contributing to the broader work associated with the delivery of the Fair Start report published on 1 June 2021.

“Millisle Primary has seen some excellent results from the scheme. In previous years, pupils were so keen to participate in Jamie’s sessions that they reached every single one of their reading targets set by the school. In fact, I’m aware that in the previous academic year, four pupils within the scheme had read over a million words with one of those pupils passing the three million mark and a further four pupils had surpassed the half a million mark within the same time frame.

“I’m very supportive of measures, such as ‘Books and Boots’ that help to encourage positive attitudes to books and enable children to enjoy reading for pleasure.”

In September 2016, Millisle Primary School introduced the new ‘Books and Boots ’ reading programme. The scheme allows pupils to build a word count by reading books and novels of their choice. Using computer software, pupils can answer questions in order to verify they have read and understood a given book.

Millisle Principal Ian McManus said: “The combination of good quality, engaging literature and the lure of football coaching has been the secret to the scheme’s success. The boys and girls respond very well to Jamie. As well as being articulate and enthusiastic, he is one of local football’s most decorated players. This makes him an ideal role model for our pupils.

“The scheme has had five full years of operation in the school with countless case studies showing pupils with increased confidence, skills and academic attainment.”