Census should focus on shared future rather than lazy conclusions – Brett

DUP North Belfast MLA Phillip Brett has said the publication of the 2021 census demands a shared future and demonstrates that Northern Ireland is made up of three minorities. 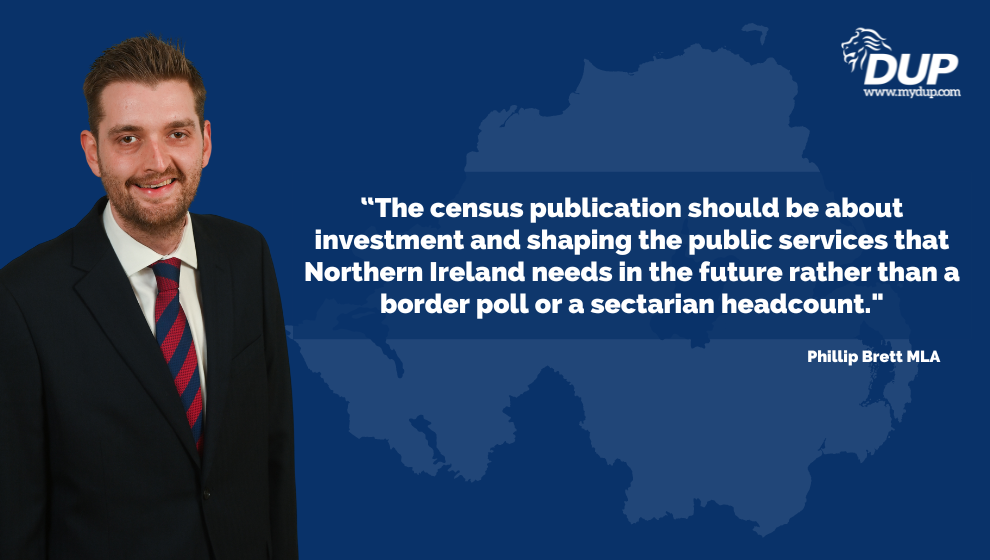 “The census publication should be about investment and shaping the public services that Northern Ireland needs in the future rather than a border poll or a sectarian headcount. To draw political conclusions based on the number of Protestants and Catholics is simplistic and lazy.

For the last twenty years there has been a trend towards a Protestant minority, a Catholic minority and a minority who don’t identify as either. Rather than focus on a divisive border poll we should ensure that Northern Ireland builds first class public services and a genuine shared future.

Sinn Fein calls for a divisive border poll on the back of this census publication shows their main focus is removing Northern Ireland from the United Kingdom rather than a shared future. We warned about this before the last election. It should be noted however, that over the last 20 years, the number of people voting for border poll parties has decreased. Our focus must be on making Northern Ireland work and ensuring we have the best foundation to build for the next generation.

Unionists and nationalists should work together for the betterment of Northern Ireland. The approach of the pro-protocol parties where they have tried to ignore the fact that every unionist MP and MLA rejects the Protocol, is not a basis for moving Northern Ireland forward.”