Call for investigation into “replica AK47"

East Belfast MP Gavin Robinson has said there should be an investigation into photographs posted online by Sinead Murtagh – the woman who chanted ‘Oh ah, up the Ra in a video with Arlene Foster’. 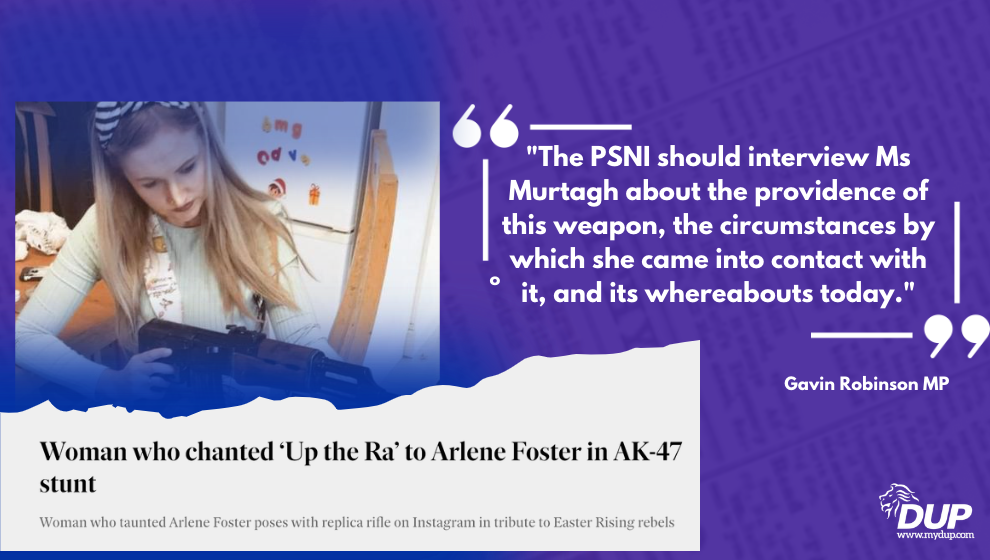 A Sunday newspaper unearthed photographs of Ms Murtagh posing with a weapon which was described by the newspaper as a “replica AK47”. Mr Robinson asked whether or how it has been established that the weapon pictured is a replica.

The DUP MP said,“Ms Murtagh has brought public scrutiny upon herself through the deliberate choice to glorify IRA terrorism in the presence of a victim of IRA terrorism.

In relation to her Instagram post tagged #ak47official, it has been reported that the weapon in question is a replica. Whilst the item in question may be a replica, there was no accompanying evidence included as to why the newspaper was satisfied that it was indeed a replica.

The PSNI should interview Ms Murtagh about the providence of this weapon, the circumstances by which she came into contact with it, and its whereabouts today. Replica weapons may not be able to fire ammunition, but it does not mean they cannot be used to cause harm. No-one in Northern Ireland should be happy that someone appears to be able to get their picture taken with such a weapon apparently around a kitchen table.”