“Any old deal” will NOT do – Sir Jeffrey

DUP Leader Sir Jeffrey Donaldson MP has said the focus on Northern Ireland this week, while useful, will be a missed opportunity if the Northern Ireland Protocol is not replaced with arrangements that can command the support of unionists and which restore Northern Ireland’s economic and constitutional place within the United Kingdom. 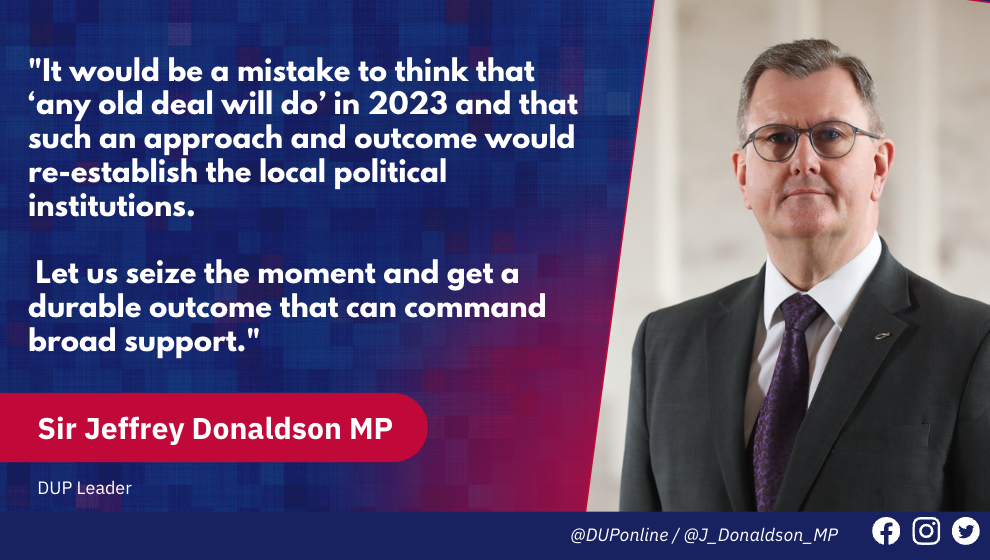 “Over recent months there has been a welcome realisation by all concerned that unionists do not support the NI Protocol and that the cross community consensus required for power sharing to function effectively has been lost. Furthermore it is now accepted, albeit reluctantly by some of its original cheerleaders that the Protocol as agreed cannot work in the real world. In light of all these realities it would therefore be important that it is understood any negotiated outcome will only work if it can command the support of the unionist community. If it does not then all the activities, discussions and negotiations of recent months will amount to little more than a missed opportunity.

During his speech at Queen’s University, Labour Leader Sir Kier Starmer looked back at the importance of the principle of consent to the Belfast Agreement, and successor agreements, but few seem to recognise that the Protocol has eroded the foundations of that central pillar. No unionist MP or MLA supports the Protocol, yet it has been imposed on Northern Ireland with its consequent harm caused to our delicate political arrangements. Progress has only ever been achieved in Northern Ireland when supported by both unionists and nationalists.

It would be a mistake to think that ‘any old deal will do’ in 2023 and that such an approach and outcome would re-establish the local political institutions. This is not a time for creative ambiguity or sticking plasters. Let us seize the moment and get a durable outcome that can command broad support.

In July 2021 we sought to set out our policy position in advance of talks between the UK Government and the EU Commission. We published our seven tests and these tests remain the yardstick that we will use to assess any published outcomes or progress reports in the discussions.

The impact of the NI Protocol on the delicate political balances in Northern Ireland, including its fundamental anti-democratic framework, caused the collapse of the Northern Ireland Executive. There will be no basis for local governance until the Protocol is replaced with arrangements that command broad support and which restore Northern Ireland’s economic and constitutional place within the United Kingdom. We look forward to seeing that outcome achieved without further delay.”