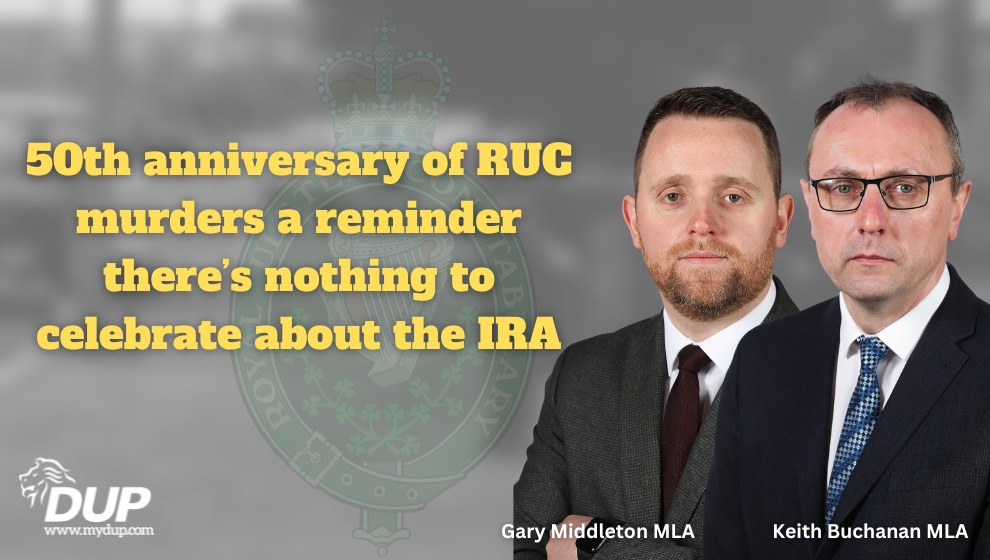 Saturday will mark 50 years since two public servants were murdered by the PIRA when their car, parked in Londonderry City Centre, was booby-trapped. Two other officers were severely injured.

Meanwhile on the same day near Pomeroy in County Tyrone, one police officer was injured and one murdered when a landmine exploded underneath their Land Rover. Mr Sandford was married with two children.

Speaking in advance of the memorial Gary Middleton said,

“Fifty years ago Northern Ireland was a very different place than it is today. I am glad we have moved on from those days and I want to be part of ensuring we never drift backwards. In recent years however, there has been an effort by republicans to re-write history. Some people want to frame the IRA as a noble and honourable organisation when the reality was utterly different.

On anniversaries like these it is vital that we remember the men and women who stood against terrorism and paid the ultimate sacrifice.”

“I will attend the unveiling of a Lambeg Drum dedicated to the memory of Henry Sandford in Drumnacross Orange Hall on Saturday.

When Michelle O’Neill, a representative for this area, says there was no alternative to the IRA, she is saying there was no alternative to the brutal slaughter of innocent people. There was nothing noble or honourable about the planting of landmines or booby-trapping cars. It was the actions of cowards who operated under the cover of darkness. I will remember these officers with pride and will honour their sacrifice. They wore their uniform for all to see and were the opposite of their IRA murderers.”