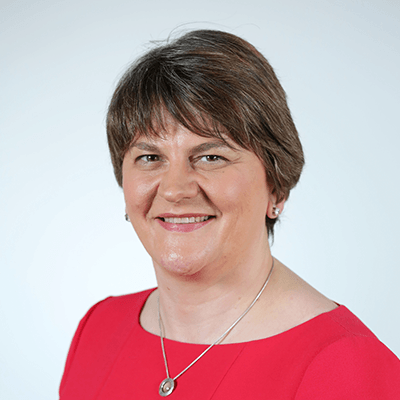 Arlene has been involved in politics since she was a student at Queen’s University and has always been known as a strong advocate for unionism, particularly in the west of the Province. A lawyer by profession, she was born and bred in South East Fermanagh and still lives in the County with her husband and three children.

Arlene joined the DUP in 2004 and has been a senior representative for the party since that time. She has been an Executive member of the Democratic Unionist Party since 2004.

Prior to the restoration of devolution in 2007, Arlene represented the DUP on the Northern Ireland Policing Board, later working closely with the Party Leader during the negotiations on the devolution of Policing and Justice.

When the Executive was established following the Assembly election in 2007 Arlene was appointed as Environment Minister where she oversaw the creation of the Northern Ireland Environment Agency and helped bring forward a new rural planning policy to replace PPS 14.

In 2008 Arlene was awarded the devolved Assembly Member of the Year by the Women in Public Life Awards. This award recognised the significant contribution that Arlene had made in the Northern Ireland Assembly, and she remains the most high-profile female politician in Northern Ireland.

Arlene served as Minister for the Department of Enterprise Trade and Investment from June 2008 until May 2015. During this period, she was instrumental in promoting our tourist industry, bringing major events like the MTV EMA awards, the Irish Open and Giro d’Italia to Northern Ireland and securing record levels of investment into the economy. The record levels of Foreign Direct Investment and the support provided for local businesses were all secured despite the backdrop of a global economic downturn.

Arlene was appointed as Minister for Finance and Personnel in May 2015 where she ensured that a budget was agreed, despite the ongoing difficulties around the refusal by some parties to sign up to welfare reform.

She has worked as acting First Minister on two occasions, firstly for a period of three weeks in 2010 and then during the summer of 2015 whilst work was ongoing to secure progress in the wake of the IRA murder of Kevin McGuigan.

After her appointment as leader in 2015 following the retirement of Peter Robinson, Arlene became First Minister of Northern Ireland in January 2016.

Following the reestablishment of the Northern Ireland Executive, in January 2020 Arlene became First Minister and held this position until June 2021.