Why is EU showing more pragmatism towards Putin’s Russia than the UK?

DUP Leader Sir Jeffrey Donaldson has questioned why the European Union is prepared to take a more pragmatic approach towards Putin’s Russia than it is towards the United Kingdom. 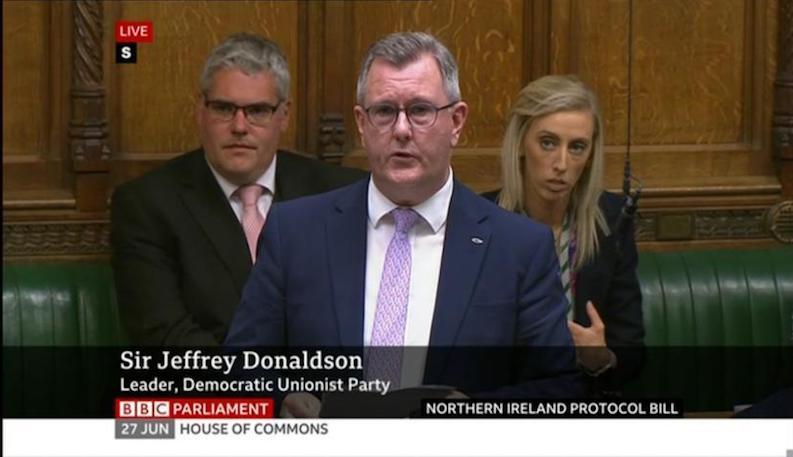 His comments come after the German Chancellor said that EU sanctions should not be imposed on goods moving to the Russian enclave of Kaliningrad because “we are dealing here with traffic between two parts of Russia”.

Sir Jeffrey said, “The Kaliningrad enclave is Russian, but is bordered by European Union states. Most goods entering it travel by road or rail through Lithuania and have been impacted by EU sanctions. The German Chancellor has now argued that such sanctions should not apply on goods moving from one part of Russia to another, even when they are transiting through an EU nation. This is because such goods are not actually entering the EU market.

It is notable that the Chancellor and the European Commission as a whole appear willing to find measures to establish a “de-escalation dynamic” with Putin’s Russia, but the United Kingdom is faced with an unyielding EU. We appear to face the prospect of the EU showing more concern for the functioning of the Russian internal market than for the United Kingdom’s.

The vast majority of goods moving from Great Britain into Northern Ireland will never even enter the EU’s territory, yet it demands checks and controls be placed over these. It is notable of course that on the one hand the German Foreign Minister is backing the inflexibility and intransigence of Simon Coveney towards the United Kingdom, yet on the other hand working to secure flexibilities with Russia. Perhaps a different approach may be taken if the United Kingdom was Germany’s largest supplier of gas. The fact that Annaleana Baerbock has accused Russia of using hunger as a weapon of war through the blockade of grain exports does not appear to have impacted on the German Chancellor’s comments or her own inflexibility on the Protocol.

It is in equal parts disappointing and revealing that the European Union has shown itself more amenable to finding solutions when faced with the tyranny of Putin’s Russia rather than several years of patient and determined negotiation and diplomacy on the part of the UK. We need to see the EU step up to the plate in agreeing solutions that remove the restrictions on trade within the U.K. Internal Market as well as protecting their own market if they are not be seen to be operating double standards.”