South Down MLA Diane Forsythe has called for honesty from Sinn Fein about the financial realities facing Northern Ireland. She said that comments from Michelle O’Neill and other Sinn Fein representatives were offering false hope to people facing a difficult winter. 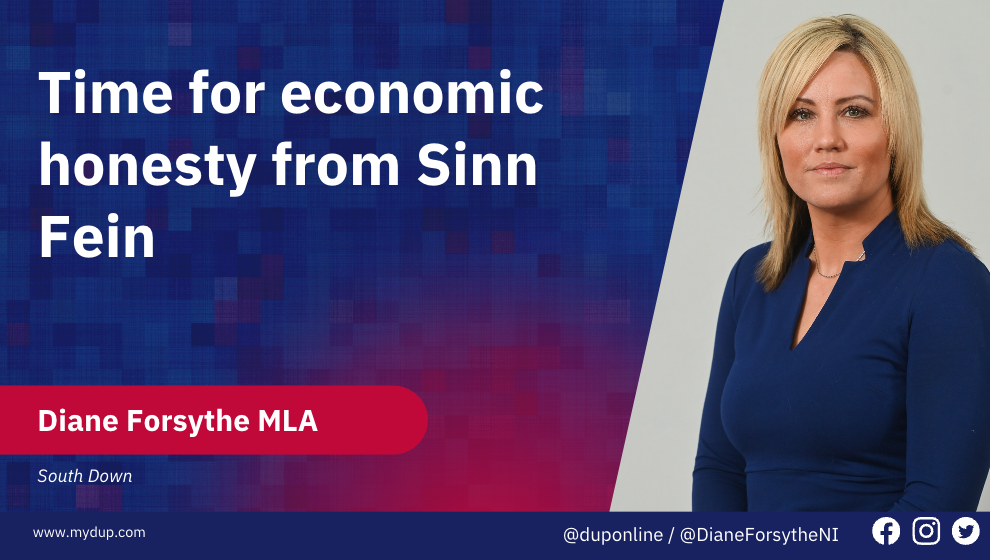 She said, “Only in the last few days Michelle O’Neill has said the Executive “would get money into people’s pockets”. That is certainly not true in relation to the £400 energy payment and she should explain such claims. The only delay on those payments sits in London and they should be released immediately. This is a scheme which has been administered by Westminster in every other region of the UK and people in Northern Ireland deserve it immediately. The money is there, the systems are there, and the energy companies are ready.

The desire to peddle a myth on this issue appears to mean that Sinn Fein are prepared to make excuses for the Conservative government. Other Sinn Fein representatives however are prepared to mislead people in even more outrageous ways.

Speaking to businesspeople recently I was amazed to hear that even within the last few weeks they were told by a Sinn Fein representative that a restored Executive would have £300 million to distribute which could be used to help them during these difficult times.

This is a complete fiction first invented by Sinn Fein’s failed Finance Minister, who perpetuated this myth for months before he was contradicted by a Fiscal Council he created. Far from the Sinn Fein claims of distributing spare funds, the realities facing Northern Ireland are how to cope with Departments overspending their budgets by £650million. Given the scale of the challenges we face, it is only the Treasury which has the resources to offer any additional support. That again is something that was latterly recognised by Conor Murphy but is ignored by his party colleagues.

All those parties who made reckless claims about money ‘sitting in a Stormont bank account’ bear some responsibility for misleading the public. We are facing a global economic crisis that is not specific to Northern Ireland or even the UK as a whole. We need representatives and parties to be honest with the public about what is available to help and not peddle false hope to people facing a difficult winter.”