DUP Upper Bann MP Carla Lockhart has rounded on those parties who have chosen to pursue unrealistic and economically destructive climate change policies, ahead of the Consideration Stage: Climate Change (No. 2) Bill in the Northern Ireland Assembly on Tuesday.

The Bill, brought forward by DAERA Minister Edwin Poots, is subject to amendments from Sinn Fein, the Alliance Party and Green Party, that would destroy our agri-food sector, hugely damaging a key pillar of our economy, and decimate rural communities. 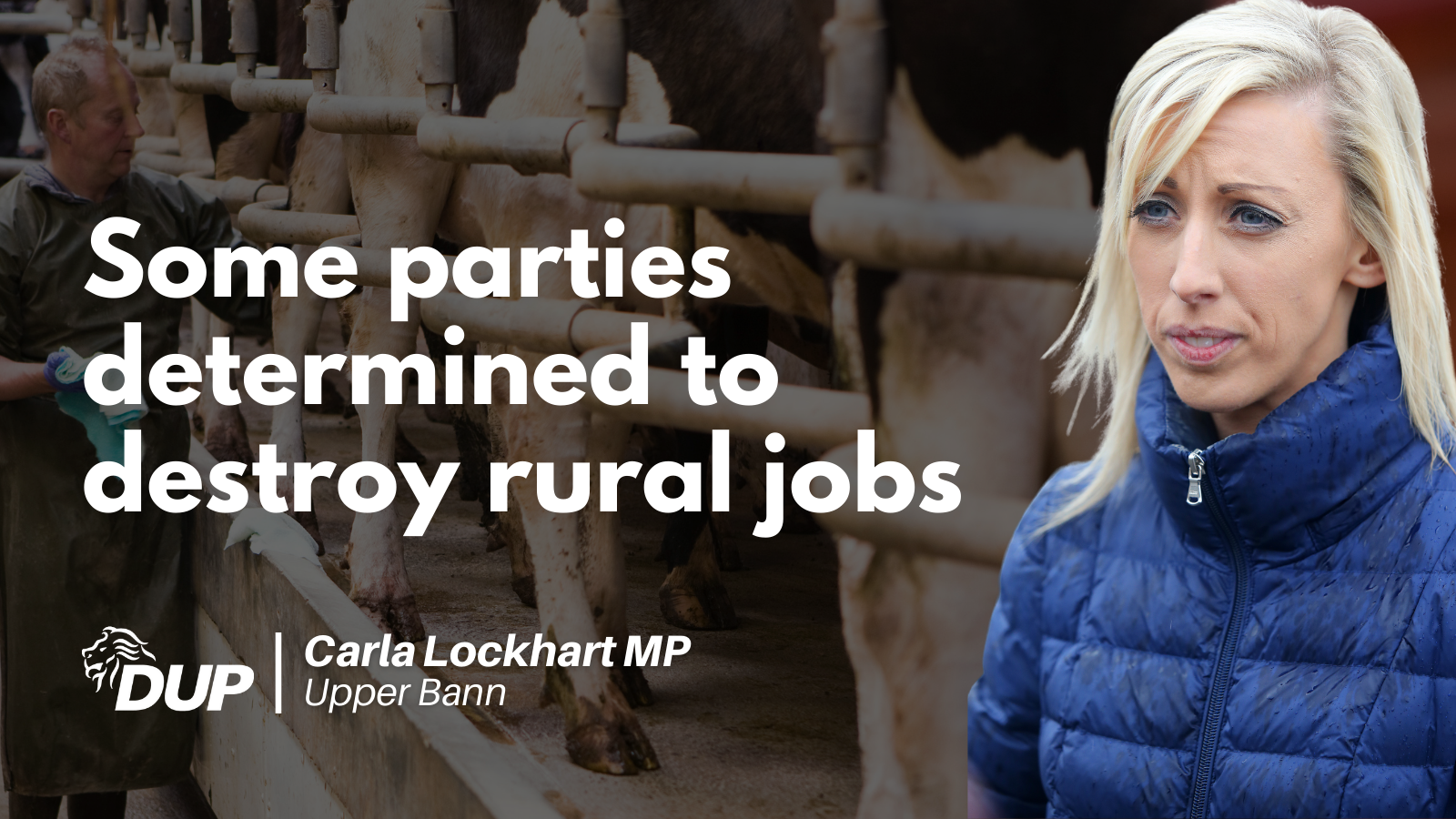 Speaking after discussions with the UFU and local farmers, Carla Lockhart said:

“The Climate Change Bill brought forward by my colleague Edwin Poots MLA strikes the right balance between protecting our environment from the impact of climate change, whilst also protecting our economy and delivering UK net zero by 2050. Unlike the Private Members Bill brought forward by the Green Party, it takes cognisance of the need to sustain jobs, particularly within the agri-food sector, whilst setting realistic targets in relation to emissions.

It is therefore deeply regrettable that Sinn Fein, Alliance, and the Green Party in particular have chosen to table amendments to fundamentally re-write Edwin’s Bill, to essentially turn it into the Private Members Bill. These amendments are not based on a sound evidence base, meaning every step taken away from the 82% by 2050 target set by the independent committee for climate change is unachievable, unaffordable and reckless.

The consequences of these amendments, if passed, could not be starker.

In a report by KPMG on the Green Party Bill, it was estimated to 13,000 jobs would be lost because of the targets set. For our farmers, to meet overzealous targets would mean an 86% reduction in cattle and sheep production. This would decimate our agri-food sector, and completely destroy our rural communities.

These parties need to think again. The Alliance, Sinn Fein, Green Party must be calculating that these policies will sit well with voters in urban areas, without any care or consideration for the rural communities right across Northern Ireland. Yet everyone, including urban voters, will pay the price with food prices rocketing if their attack on this Bill is successful. It will also outsource food production to areas of the world that are cutting down rainforest, destroying our global ability to capture carbon and endangering species. Climate change is a global problem not just for Northern Ireland.

Moving further than the 82% by 2050 will have a greater impact on everyone's pocket; public finances, businesses, public transport and the way we heat our homes. At a time when inflation and energy prices are extremely high and household budgets feeling the pain, we must ensure policy decisions on climate change are based on science and not popularity. Furthermore, the hypocrisy of Sinn Fein who say one thing in the Irish Republic, while pursuing a different more destructive agenda in Northern Ireland will lead people to draw their own conclusions.

The DUP stands shoulder to shoulder with our farming community in the face of this existential threat. We urge people across Northern Ireland to make their views known to MLAs before Tuesday.”