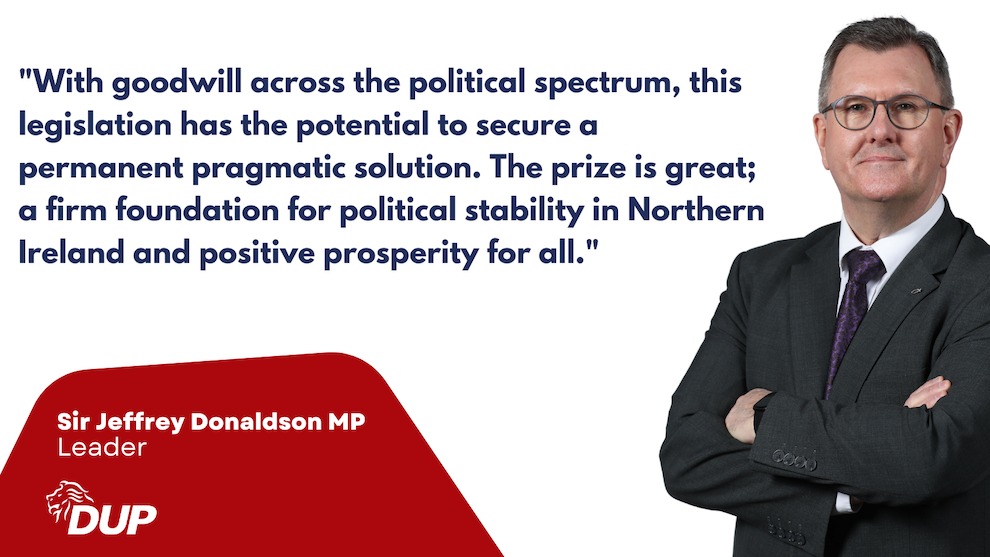 “Having called for action, the publication of this Bill is welcome recognition by the Government that the Protocol must be replaced with arrangements that respect Northern Ireland’s place in the United Kingdom.

We will want to examine the Bill against our seven tests to determine that, if enacted, it will restore Northern Ireland’s place within the UK internal market and remedy the democratic deficit of the Protocol. We seek the restoration of democratic decision-making to the Northern Ireland Assembly.

The Belfast Agreement has been significantly damaged as a result of the Northern Ireland Protocol. The political progress secured in Northern Ireland has been achieved on the principle of the support of both Unionists and Nationalists.

It remains possible to restore the constitutional integrity of Northern Ireland’s place within the UK, remove the democratic deficit at the heart of the Protocol and eradicate the friction imposed on East/West trade whilst recognising the EU needs to protect their single market.

With goodwill across the political spectrum, this legislation has the potential to secure a permanent pragmatic solution. The prize is great; a firm foundation for political stability in Northern Ireland and positive prosperity for all.

Those claiming this Bill endangers devolution are wrong. The very opposite is the case. Northern Ireland does not currently have a fully functioning Assembly or Executive because of the flawed and imbalanced Protocol that has eroded unionist support for the Belfast Agreement.

Northern Ireland needs legislation to fix the very obvious real-world problems caused by the Protocol. In the absence of not having secured a resolution with the EU it is vital we see action to restore the constitutional balance and our position within the United Kingdom. The proposals advanced by Brussels would have led to more costly checks on passengers, pets and goods between Northern Ireland and the rest of the United Kingdom, not fewer.

We will engage constructively in the legislative process and look forward to devolution being restored but those intent on using this Bill to undermine the Prime Minister should step back and recognise that Northern Ireland is too serious a matter to be the subject of more political games.”