DUP Leader Sir Jeffrey Donaldson MP has spoken to the Chief Constable to express support for two officers targeted by a bomb whilst on-duty in Strabane on Thursday evening. 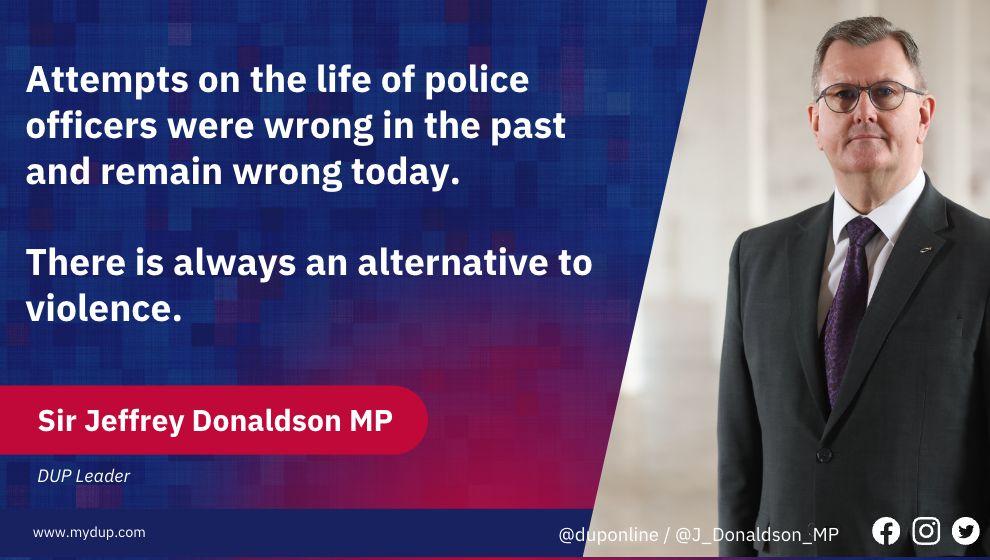 ‘‘This callous and seemingly pre-meditated attack must be roundly condemned. My thoughts first and foremost are with the officers affected, their loved ones and PSNI colleagues as they come to terms with has happened.

Attempts on the life of police officers were wrong in the past and remain wrong today. There is always an alternative to violence. Northern Ireland will not be held to ransom by fringe elements intent only on bloodshed and dragging our society backwards.

It is clear from the scenes this morning that those responsible for such cowardly acts offer nothing but hurt and disruption for the communities they purport to represent. Political leadership is needed to send a strong message that this behaviour has no place in our society.’’

The DUP’s Lead Policing Board representative Trevor Clarke MLA echoed these remarks and stressed that the attack should lead to a reassessment of the threat level in Northern Ireland.

He added: ‘‘This attack demonstrates the clear and persistent threat to those in uniform who are dedicated to making our streets safer and preventing harm in communities.

It is bewildering that despite there still being the capacity and intent to carry out such reckless violence, even in residential areas, there are calls in some quarters for personal issued firearms to be removed.

We would expect that this incident should at the very least trigger a fresh review of the threat level in our Province. This is not the time to drop our guard.

I would encourage the local community to reject those intent on violence and to come forward with any information that could help the PSNI find those responsible.’’