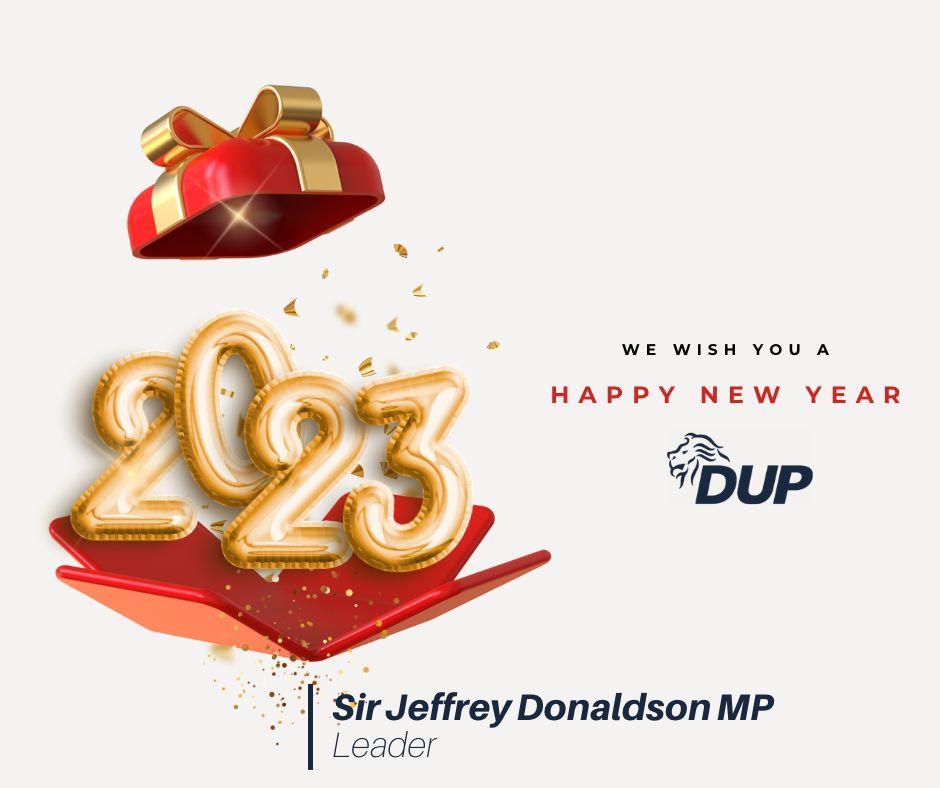 “I send best wishes for the New Year to everyone in Northern Ireland.

2023 can be a seismic year for Northern Ireland. We can replace the NI Protocol with arrangements that unionists can support and thus restore genuine powersharing, or the concerns of unionism will not be addressed and this place we all call home will become trapped in a Protocol holding pattern which is the worst of all worlds. A world where we have spent £436k per day to help companies deal with Protocol paperwork. If that money had been used to employ nurses, it would have paid the annual salary for another 7,000 highly experienced nurses.

‘Agreeing’ a ‘solution’ that unionism is unable to support will not move Northern Ireland forward. Whether in 1973 or 2023, the lesson remains. Northern Ireland only moves forward together. Genuine powersharing based on consensus is the only way forward. The idea that one section of our people will dominate the other and ignore the concerns of unionists will never produce durable or balanced outcomes.

Whilst the community divisions of Northern Ireland have changed too slowly in 50 years, the challenges for each of us as citizens have changed. As a Party, we will continue to work to ensure people receive the support they need during the current cost of living crisis. Additionally, we will work with other local parties to secure the reform and investment that is needed to transform our health service and drive down waiting times for vital treatment. We will also pursue investment in our schools, universities and other public infrastructure to build a Northern Ireland fit for the 21st century.

We are already building for new jobs and new industries. 2023 will mark the halfway point in Project Stratum where many rural homes, for the first time, will get a fibre broadband connection. When this project is complete in 2025 Northern Ireland, because of DUP vision and leadership, will be the best-connected region in the British Isles with 100% fibre broadband whilst GB and RoI are currently below 50%.

Another challenge we must address is the cost of childcare. Whilst we are blessed with a highly talented workforce, too many of our brightest and best are unable to be employed because the cost of childcare is crippling. The major lever to unlock work for many of these parents must be in Treasury where the tax system is used to enable people to return to work and pay for childcare.

2023 will see the Local Government election and one of the youngest and most vibrant candidate pools the DUP has ever fielded. The date for the poll has rightly been moved to enable the country to celebrate the King’s coronation. This election will be an opportunity for unionism to show that the divisions of the past are mending. The lesson of the NI Assembly election was that division handed seats to our opponents. That mistake must not be repeated in the Council elections. Sinn Fein dominated councils have repeatedly banished any vestige of British identity. This Council election must be an opportunity for pro-union voters to work together to ensure the unionist vote is maximised and we have strong teams elected to challenge the “not a Brit about the place” agenda of Sinn Fein.”