East Belfast MP Gavin Robinson has said that Sinn Fein do not and will never have the authority to sit in judgement and decide who it was ok for the IRA to murder. His comments follow an interview where Sinn Fein President Mary Lou McDonald said the IRA should not have harmed any member of the Garda. 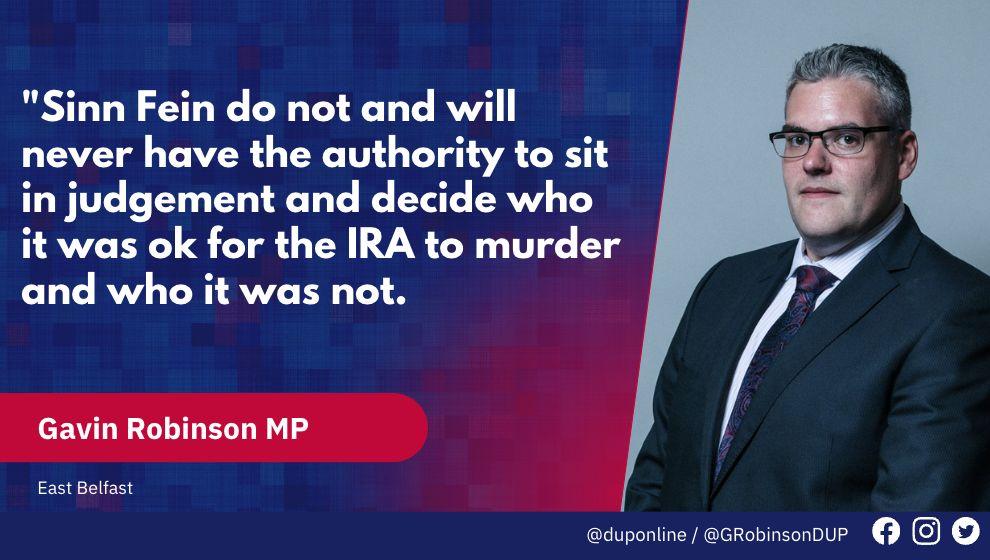 He also said there was a link between Sinn Fein’s attempts to sanitise and justify IRA violence and recent incidents of sectarian behaviour including phrases like “Up the RA”.

The DUP MP said, “By singling out Garda officers, the Sinn Fein President not only casts a de facto judgement on the murder of police officers in Northern Ireland, but on everyone else targeted by the Provisional IRA. Michelle O’Neill has told us in the past that there is no hierarchy of victims, yet we see a very clear hierarchy within Sinn Fein’s own warped ideology. The blunt fact is that Sinn Fein do not and will never have the authority to sit in judgement and decide who it was ok for the IRA to murder and who it was not.

These comments all emanate from Sinn Fein’s determination to gaslight us all into believing their violence was different; that their gangsterism was justified and that their murder can be celebrated. Just as there is no difference between Dublin gangsters and the Provisional IRA there is also no difference between dissident republicans throwing a Christmas party to celebrate the attempted murder of two police officers and Sinn Fein holding events which celebrate individuals whose only ‘contribution’ to society was to engage in the very same type of attacks on RUC officers or others.

Mary Lou McDonald may claim not to be the author of history, but she and her colleagues are feverishly attempting to be the authors of freshly rewritten history. It is unclear whether Sinn Fein are using recent incidents relating to phrases like “Up the Ra” as cover for stepping up their rhetoric attempting to sanitise and justify IRA violence, or whether people feel the words and actions of Sinn Fein give them cover for their offensive, sectarian behaviour. What cannot be avoided however is the increase in both of these over recent months.”