South Down MLA Diane Forsythe has said the Sinn Fein President's claim there was "no comparison" between the Provisional IRA and gangland criminals ignores the blatant realties of the IRA's operations. She also said that when Sinn Fein eulogise IRA members they are celebrating and glorifying criminals. 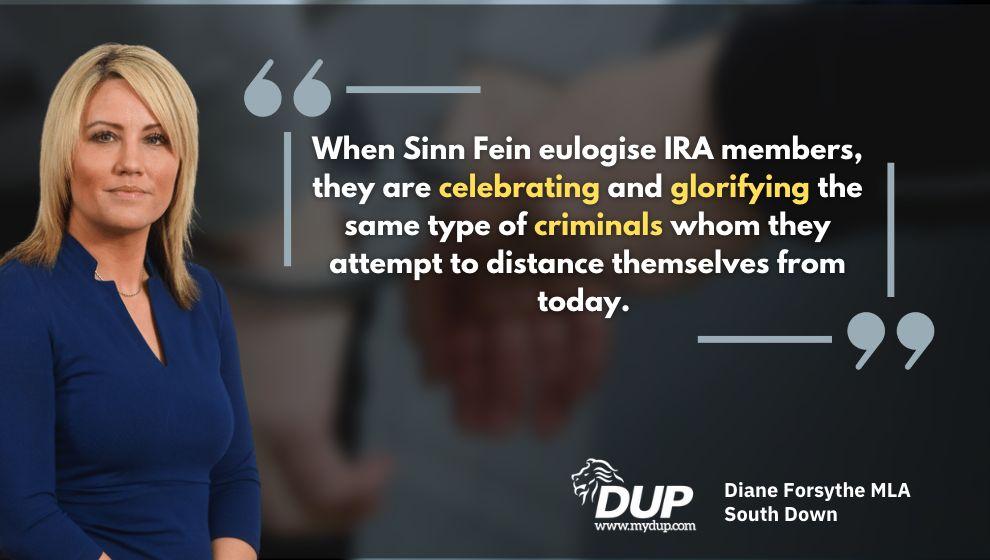 The DUP MLA said, "Mary Lou McDonald's claim is another attempt to rewrite history and follows the same path as previous attempts, including the recent claim by Michelle O'Neill that there was no alternative to IRA terrorism. These claims ignore the blatant realities of the IRA's activities.

Every murder carried out by the IRA was just as much a crime as a gangland murder. When Sinn Fein eulogise those who carried out such acts, they are celebrating and glorifying the same type of criminals whom they attempt to distance themselves from today.

The Sinn Fein President's comments also carefully ignore the litany of other IRA criminal activities. Whether it was fuel and cigarette smuggling, racketeering and extortion or the robberies carried out by the IRA, those are no different to the organised criminal gangs that operate today. On top of that there are the multiple reports of rape and sexual abuse both carried out and covered up by the IRA.

The only difference between today's gangland criminals and the Provisional IRA is that they have not put in place a concerted campaign with the aim of sanitising, justifying and even glorifying their criminal enterprises. They also have not benefitted from state-sponsored assistance in the form of either then 1998 prisoner releases or the Government's current proposals for amnesty.

Unfortunately we see the fruits of that today where the justification of the IRA's sectarian and criminal campaign feeds into an upsurge of hate crimes including on my own local war memorial, or the burning or Orange Halls."