The DUP’s Lead Policing Board representative Trevor Clarke MLA has welcomed the decision by the High Court to grant permission to former police officers to challenge the Police Ombudsman’s recent findings of ‘collusive behaviour’ against the RUC. 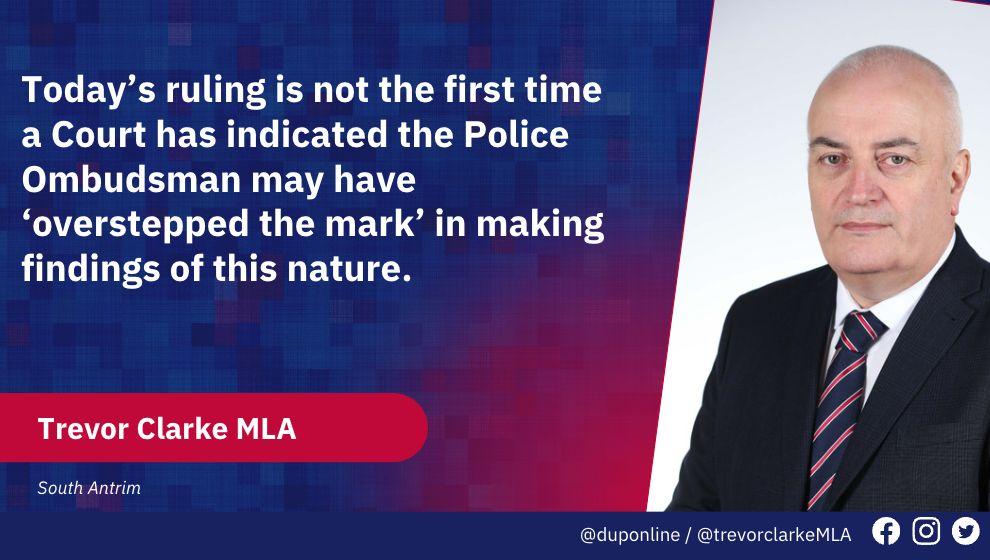 Responding to the ruling - which was secured by the Northern Ireland Retired Police Officers Association - Trevor Clarke said:

‘‘The standing of the RUC has been unfairly tarnished by a recent list of reports by the Police Ombudsman’s Office which allege ‘collusive behaviour’ without bringing forward a shred of evidence capable of instigating criminal proceedings. This ruling is a positive first step toward challenging the legal basis for such assertions and thus defending the reputation of the vast majority of officers served with distinction during our darkest days.

Today’s ruling is not the first time a Court has indicated the Police Ombudsman may have ‘overstepped the mark’ in making findings of this nature. It is a matter of deep regret that the Office has not seemingly learned from past mistakes. Instead it seems likely that it will become engaged in another protracted legal battle that could have been avoided. This does precious little to restore waning confidence in our police complaints system, which has been beset by delay.

I want to commend the Association for their perseverance in securing this judgement and assure them of our continued support moving forward.’’

‘‘The Police Ombudsman it appears has sadly fallen into the trap of investigating allegations of collusion without recourse to any statutory definition in law. To make matters worse, the reports published by her office in recent times largely fail to present an understanding of the policing context of the period - a period in which police officers and our society as whole were subject to an unprecedented terrorist campaign.

Such an approach inevitably means the actions of the RUC are being unfairly judged against the expectations of modern day policing. This leaves the door open for revisionism.

The reality is that police officers during the Troubles did not have infinite time or resources. The RUC had to prioritise decisions and operations on the basis of an assessment of risk in order to preserve life. In this challenging environment, mistakes were regrettably inevitable, however not on a scale, or with an intent, comparable to colluding with terrorists.

The DUP will continue to press for these facts to be reflected by the Police Ombudsman’s Office going forward.’’