DUP representatives have condemned allegedattempts by a fringe republican group to prevent outreach by the PSNI intoschools across Northern Ireland. 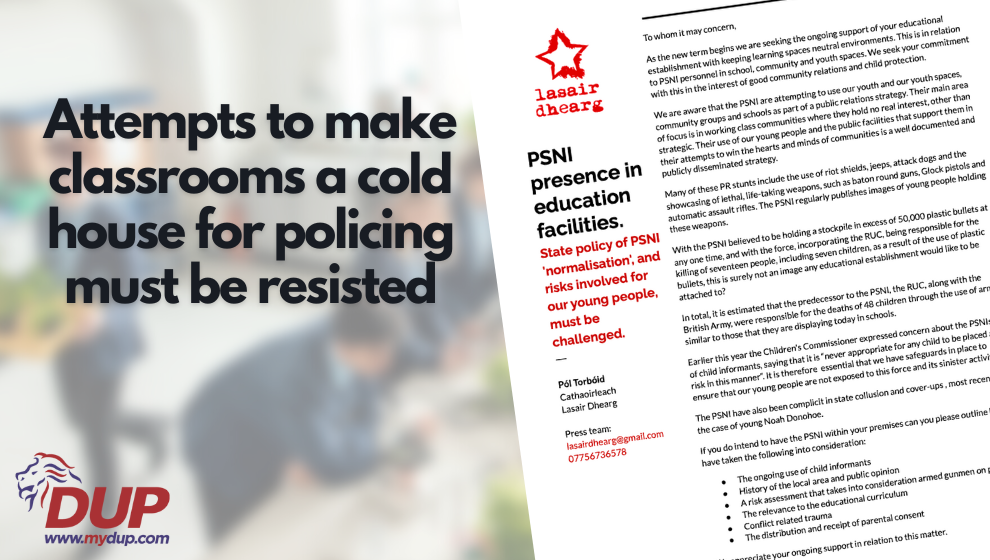 Commenting after reports emerged that a number of school principals had received correspondence from Lasair Dhearg opposing the ‘normalisation’ of policing in education, the Party's Lead Policing Board representative and South Antrim MLA Trevor Clarke said, :

‘‘Any campaign intended to intimidate school staff who legitimately engage with the PSNI across a range of areas should be roundly condemned across the political spectrum.

Local and Neighbourhood Policing Team officers provide a vital outreach function in schools, educating and engaging with young people on the rule of law, promoting responsible behaviours and encouraging internet safety. They also play an integral role in helping to identify and support those children and young people at risk of harm.

Attempts to make our classrooms and assemblies a cold house for policing must therefore be strongly resisted.

Sadly, the ongoing failure by the republican movement to seriously promote grassroots support for law and order in the communities they represent, including by endorsing policing as a career, lends itself to a vacuum in which these warped fringe elements are able to thrive.

We need to see leadership from Sinn Fein distancing itself from these self-titled ‘socialist republicans’ whose stated aim is the ‘radicalisation’ of communities. Ultimately anyone unwilling to support a culture of lawfulness in our schools cannot plausibly claim to be a First Minister for all.’’

East Belfast Joanne Bunting added “This is an outrageous attempt to intimidate schools and to drag society backwards.

The use of language like “armed gunmen” is an obvious attempt to demonise police officers who serve us all. A demand that schools answer some sort of ‘check-list’ if police officers are visiting the premises also appears to carry with it an implied threat that the school would be further targeted by this organisation should police officers visit.

I would hope that no school will give in to such bullying tactics.

As with terrorism thirty years ago, it is the efforts of the police and particularly their intelligence gathering that has crippled the efforts of dissident republicans who seek to drag us backwards.

There needs to be leadership stepping up to clearly advocate for a career in policing within the nationalist community. Everyone must make clear the PSNI is a viable and important career path and everyone should feel safe in choosing it.”