The DUP’s lead Policing Board representative Trevor Clarke has reacted to the news that a probationary police officer repositioned after the PSNI operation on the anniversary of the Sean Graham atrocity has been completely vindicated by the Police Ombudsman. 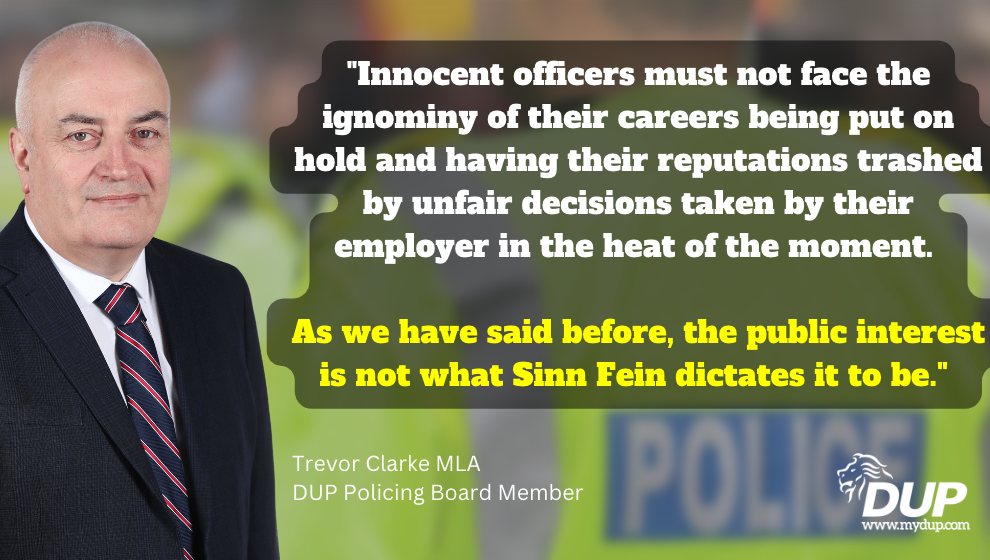 ‘‘Having completing its investigation, the Police Ombudsman has found this officer to be entirely innocent of any wrongdoing. I welcome this outcome and hope it goes some way to affording the officer involved and his family the opportunity to rebuild their lives.

Equally, this development casts a dark shadow over the Chief Constable’s decision to take action against this officer within hours of the incident and without affording them the protection of due process. We shouldn’t forget that Simon Byrne used as the basis for his decision to reposition this vindicated officer the fact that he had personally reviewed body cam footage and adjudged the actions of officers to not be in keeping with the values of the PSNI. This sadly calls into question his professional judgement.

It is also clear that this case still has some distance to go. The Police Federation have sought leave to take a judicial review against the Chief Constable in respect of the lawfulness of the treatment of these two officers. In proceedings to date, submissions by legal counsel on behalf of the Chief Constable appear to suggest that political pressure, including by senior figures in Sinn Fein, had a bearing on the PSNI’s knee-jerk reaction to this operation.

Therefore is crucial that we establish all of the facts. Other innocent officers must not face the ignominy of their careers being put on hold and having their reputations trashed by unfair decisions taken by their employer in the heat of the moment. As we have said before, the public interest is not what Sinn Fein dictates it to be.

The Chief Constable also has a duty of care to his workforce. The suggestion that neither officers has been contacted, let alone provided access to aftercare, is a poor reflection on the PSNI and its commitment to staff health and wellbeing.

It is also concerning that the latest developments were capable of being broadcast in the mainstream media without first having been brought to, and discussed by, the Policing Board. The DUP will continue to press for fuller and more transparent scrutiny of these issues in the days ahead, whilst advocating for those officers affected to be provided with the practical support that they need.’’