Protocol should serve as warning on damage to power-sharing: Paisley

North Antrim MP Ian Paisley has said that if Leo Varadkar wants to prioritise power sharing as Taoiseach then he must accept the toxic impact of the Northern Ireland Protocol. 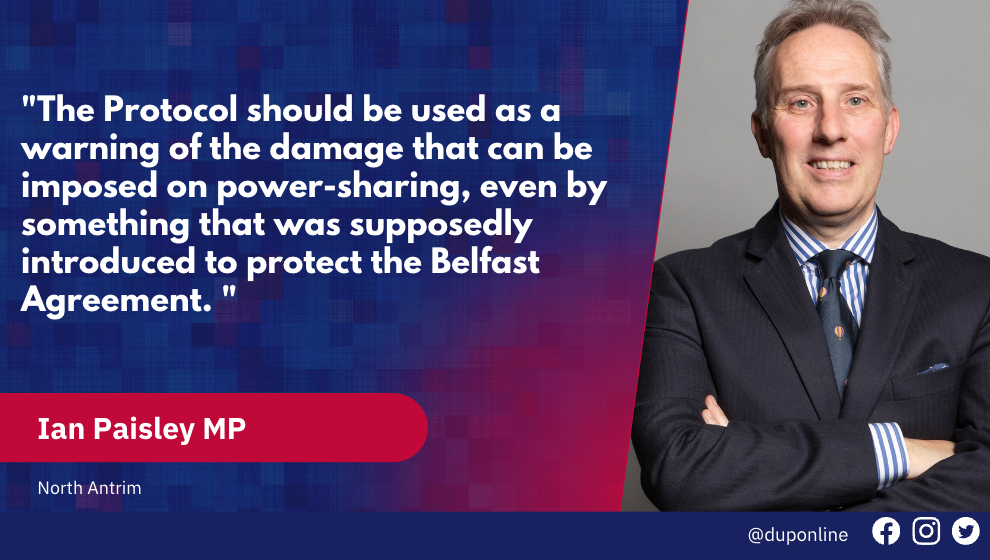 The DUP MP said, “Whilst power-sharing and the operation of the Assembly is a Strand One issue and is therefore a matter for the local parties and the United Kingdom Government, it does have an impact on North-South relations.

The Protocol should be used as a warning of the damage that can be imposed on power-sharing, even by something that was supposedly introduced to protect the Belfast Agreement. Community relations within Northern Ireland have been damaged, and North-South relations impacted too because of the Protocol, and also due to some of Leo Varakar’s own rhetoric and actions.

His forecasts that ‘troops could be back on the border’ came after previous use of a newspaper article in relation to the PIRA bombing of a customs post. These were all unhelpful and did nothing to stabilise power-sharing in Northern Ireland or improve cross-border relations.

If the incoming Taoiseach can help secure a solution to the Protocol which respects Northern Ireland’s place within the United Kingdom and which can be supported by unionists as well as nationalists then devolution based on cross-community consensus can return in Northern Ireland. That would be a significantly better legacy for Leo Vardkar to leave from his next period as the Republic’s Prime Minister.”