Below is the text of a letter sent by DUP Leader Sir Jeffrey Donaldson MP to the Secretary of State for Northern Ireland on Friday. 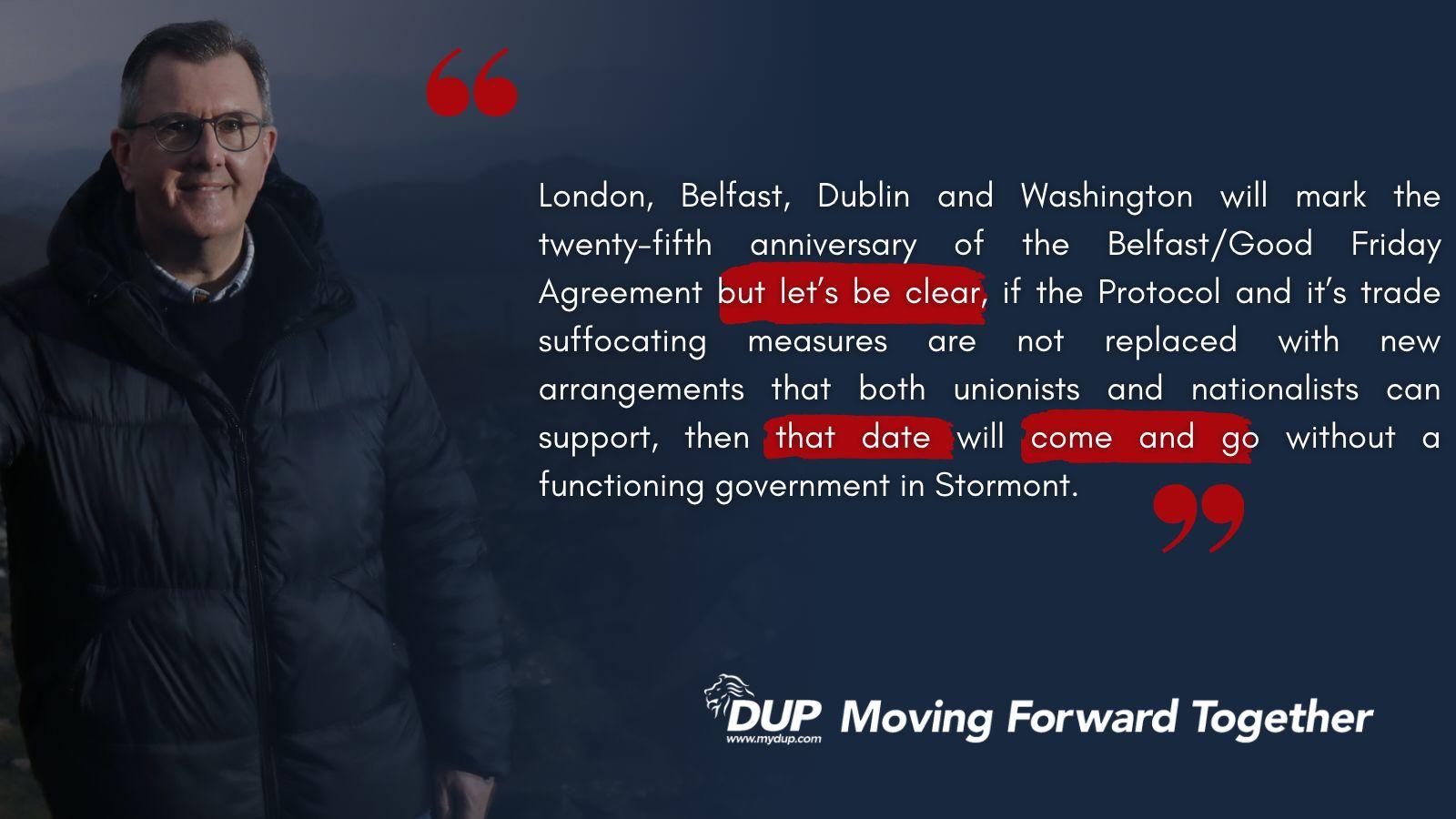 It is 709 days since the Conservative Government passed legislation in the House of Commons which abandoned Northern Ireland into the clutches of the Northern Ireland Protocol. That Protocol has, as we warned at its conception, undermined the institutions flowing from the Belfast and successor Agreements. Rather than expending energy targeting the DUP, the Government would be better to focus on replacing the Protocol with arrangements that unionists and nationalists can support.

His Majesty’s Treasury has confirmed to my colleague Gregory Campbell MP that the Trader Support Service, established to help companies deal with NI Protocol generated paperwork, has cost the taxpayer £318.7 million. That’s £436k per day or £18k per hour. That £436k per day could employ more than ten highly experienced full-time nurses in Northern Ireland for a year.

This means that whilst you as Secretary of State talk about protecting our public services including health, the Protocol related paperwork costs the salary of more than 10 highly experienced nurses every single day.

Whilst I understand the steps you have taken with regard to MLAs’ salaries, I do not understand why the Government has delayed the vital £600 energy support payments to people in Northern Ireland by making fundamental changes to the scheme in the mouth of Christmas.

A number of government ministers, including the former Prime Minister, had stated clearly that the payments would be made to households in Northern Ireland in November. The energy companies were completing their preparations to facilitate the payments last month until the Government moved the goal posts and demanded a “cash-out” option which a previous HMG Minister had said was not required nor wanted.

Rather than trying to deflect blame onto the DUP for this delay, would it not be better for the Government to fully explain the rationale behind the decision to change the scheme at this late stage so that at least people can understand what is happening and why the payments are delayed?

Following the restoration of devolution in early 2020, we operated Stormont for two years and despite no unionist MLAs supporting the Protocol our concerns were not addressed. I warned the then Prime Minister on 1 July 2021 that the Protocol and devolution were not compatible. I repeated that warning on 9 September 2021 and we withdrew our First Minister on 3rd February 2022 because our warnings had resulted in no real or decisive action by the Government to deal with the Protocol.

We were forced to stop operating the institutions to bring matters to a head. I regret that it took such decisive action on our part to make people accept there was a problem. I am however glad that people in Sinn Fein, the SDLP, the Alliance Party as well as Dublin and Brussels now no longer talk about ‘rigorous implementation’ of the Protocol. They accept there are problems but we now need a solution that unionists can also support.

Unionists will not be bullied or cajoled. There is no solid basis for an Executive and Assembly until the Protocol is replaced with arrangements that restore NI’s place in the U.K. Internal Market and our constitutional arrangements are respected. The Government need to deliver that either through the Protocol Bill or through negotiations which deliver a similar outcome.

The Government and the EU have been aware of our consistent position regarding the sustainability of Stormont for almost two years. That time has been squandered. Whilst the EU must bear primary responsibility as a result of their inflexible negotiating mandate, successive Prime Ministers and Secretaries of State have not succeeded in addressing the problem either. Rather than being at loggerheads, I hope that you and I can work together during your term of office to find the solution.

That will require a change of attitude on the part of some in the Northern Ireland Office who seem to have forgotten that political progress in NI was hard won and is built on the support of unionists and nationalists. Not one unionist MLA or MP supports the Protocol. The idea that one section of our people will dominate the other and ignore the concerns of unionists will never produce durable or balanced outcomes.

To any neutral observer, devolution and the Protocol were never going to be compatible.

Indeed, on a practical level, every day Northern Ireland is subjected to some new Protocol problem that bedevils a business or a consumer.

We must remember all these problems are at a time when only a fraction of the Protocol is implemented. Large swaths of the Protocol are negated by the operation of grace periods either with or without the consent of both sides. These grace periods are ensuring we have food on our shelves and medicines in our hospitals.

Replacing the Protocol is not a unionist question or a nationalist question.

At a time when households and businesses can least afford it, haulage costs between GB and Northern Ireland have risen by nearly 30% as a direct result of the Protocol.

Under the Protocol, there is a 25% tariff on the steel used to build our schools, roads, hospitals, and houses if the steel comes from Great Britain.

The trade friction between Northern Ireland and Great Britain is fuelling the cost-of-living crisis locally as well as restricting consumer choice.

But we must also consider the constitutional challenge as the Protocol represents an existential threat to the future of Northern Ireland’s place within the Union. It must be replaced by arrangements that fully protect and restore Northern Ireland’s place within the UK Internal Market as promised by the Government in the New Decade New Approach Agreement.

We welcomed and supported the introduction of the Northern Ireland Protocol Bill at Westminster. If fully enacted, this legislation has the potential to provide the solution that will free Northern Ireland from the grip of the Protocol and restore our rights as British citizens to trade freely with the rest of our own nation under Article 6 of the Acts of Union. But its progress is tediously slow.

In 119 days, people in London, Belfast, Dublin and Washington will mark the twenty-fifth anniversary of the Belfast Good Friday Agreement. Let’s be clear, if the Protocol and it’s trade suffocating measures are not replaced with new arrangements that both unionists and nationalists can support, then that date will come and go without a functioning government in Stormont.

I truly hope this can be avoided and we must all redouble our efforts to secure a credible solution.