The DUP’s Lead Policing Board representative Trevor Clarke has reiterated his Party’s position that any reform of how police misconduct proceedings are dealt with in Northern Ireland must not jeopardise the safety of officers. 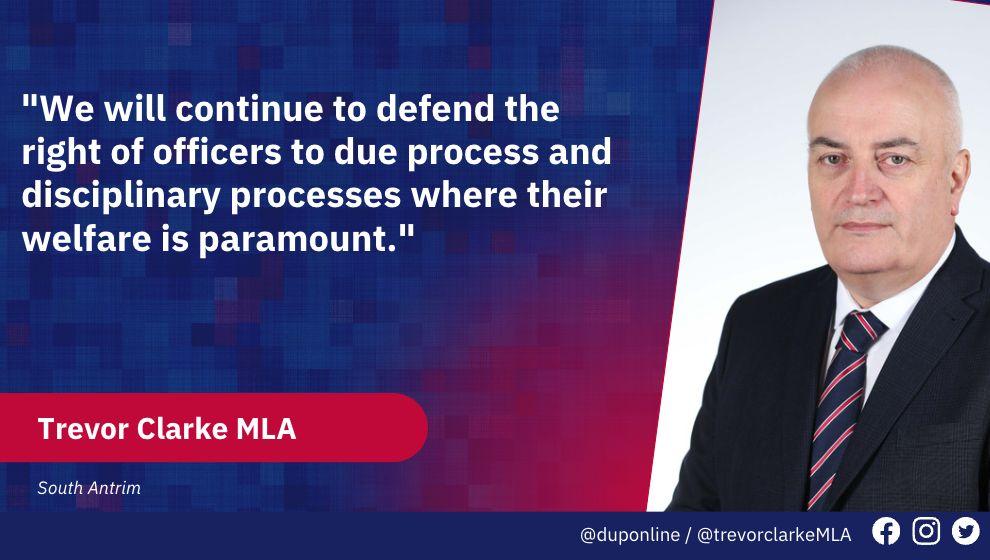 ‘‘We echo the concerns raised by the Police Federation in relation to public hearings for misconduct hearings. Recent attacks in Londonderry and Strabane demonstrate that the threat from dissident republicans towards police officers is active and credible. The notion that officers should be required to appear publicly at hearings is neither justified nor proportionate given the enduring threat level. It would expose them and their families to unacceptable risks. Indeed it is foolish for anyone to believe there can be a direct read across between this provision in England and Wales. The unique policing environment in our Province must be acknowledged and respected.

The DUP has consistently held this position. Regrettably, as a minority grouping on the Policing Board, the final publication of corporate reports does not wholly represent our views or vision. However, it is worth noting that the final text on this occasion expressly recognises that in respect of public hearings ‘‘the Board is aware of the difficulties this would pose in Northern Ireland.’’

We will continue to defend the right of officers to due process and disciplinary processes where their welfare is paramount. As a Party, we expressed concerns with plans for public hearings in the Police Ombudsman’s Five-Year Review and, more recently, in response to the Board’s review of the human rights of PSNI officers.

Any reforms will ultimately require agreement and a change in regulations. Rather than focusing on divisive proposals that do not command the necessary public or political support, we need to take forward changes that drill down into the causes of significant delay in misconduct proceedings and provide better, fairer and timely outcomes for affected officers and complainants. We will continue to work with the PSNI and Police Federation to make this progress a reality.’’