No Conservative and Unionist Government should ever accept Irish Sea Border

DUP Leader Sir Jeffrey Donaldson MP has this evening addressed the 1922 Committee of the Conservative and Unionist Party, in advance of the Foreign Secretary’s meeting with European Commission Vice-President Maros Sefcovic. 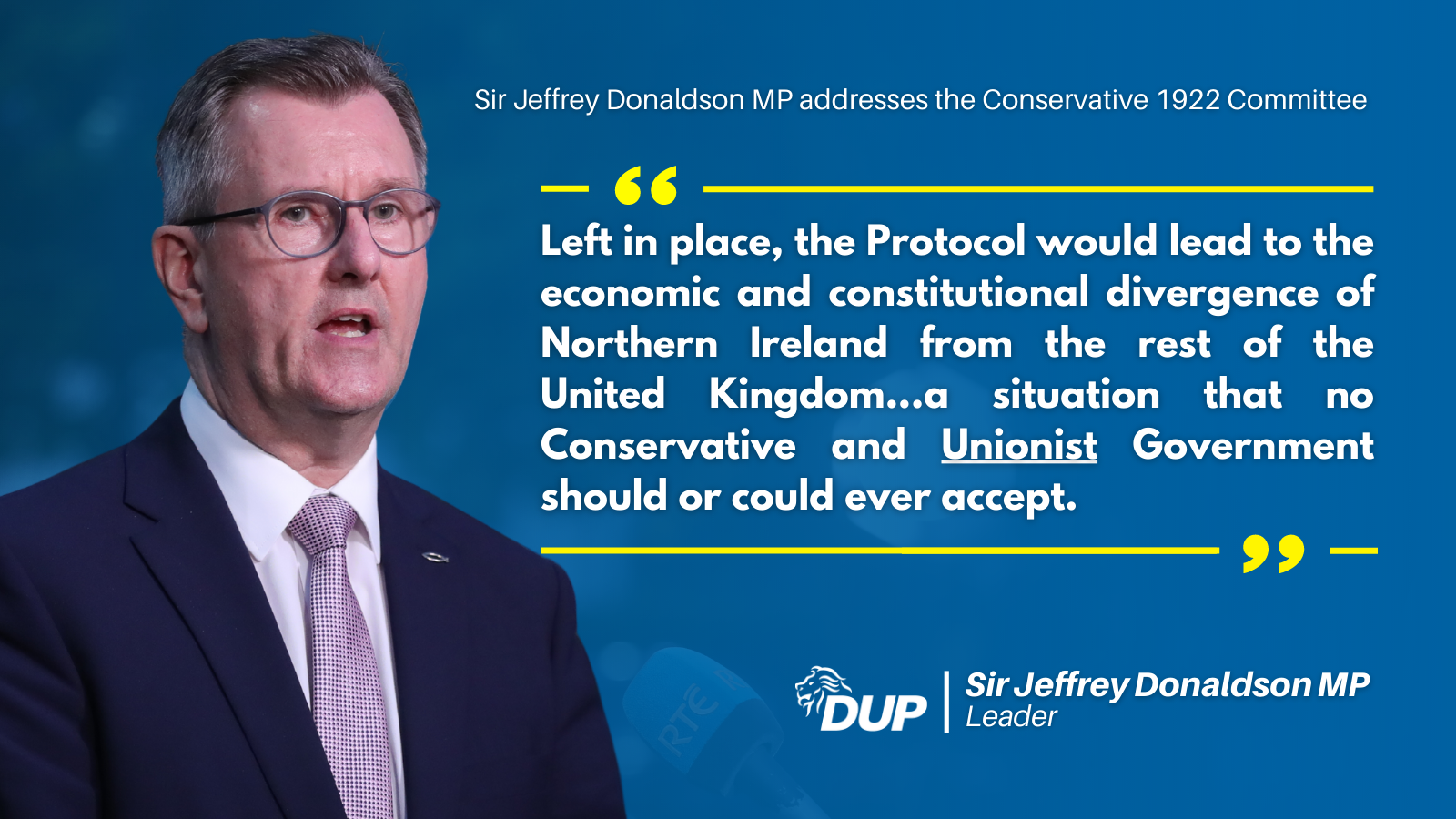 The DUP Leader outlined the political, economic and societal damage being caused to Northern Ireland and its people by the Protocol arrangements and reiterated the need for imminent action by HM Government to restore Northern Ireland’s place within the Internal Market of the United Kingdom.

Speaking after the meeting, the DUP Leader said.

“This was a welcome opportunity to outline to the Conservative Parliamentary Party, the hugely damaging and destabilising impact of the Protocol upon Northern Ireland and to reiterate the need for imminent action by HM Government. In short, it is a good deal for Brussels but a bad deal for the United Kingdom.

I used this important opportunity to set out the clear and unambiguous assessment by Northern Ireland’s pro-Union voices, that if left in place, the Protocol would lead to the economic and constitutional divergence of Northern Ireland from the rest of the United Kingdom. A situation that no Conservative and Unionist Government should or could ever accept.

There was a clear concern expressed by those attending, regarding the continued role of the European Union in the internal affairs of the United Kingdom. Without any input whatsoever from representatives of the UK, Northern Ireland is required to implement EU law and is subject to the jurisdiction of the EU Courts.

The current temporary grace periods may be shielding Northern Ireland from the full economic devastation of the Protocol, but at a current cost to our economy of £2.5 million each day, businesses across the United Kingdom cannot sustain the continued imposition of the Protocol.

There was a clear understanding from the 1922 Committee, that the Protocol was imposed upon Northern Ireland without the support of its people and a clear recognition that even those parties in Northern Ireland who previously argued for its ‘rigorous implementation’ now accept that the current arrangements are unworkable.

The wrongs of the Protocol must be righted as quickly as possible and I welcome the strong words of support from across the Conservative Parliamentary Party to reverse the damaging consequences of the current arrangements. Now is the time for action.

Parliament will play a vital role in restoring Northern Ireland’s place within the internal market of the United Kingdom in line with the Government’s Command Paper and guaranteed to the people of Northern Ireland in the New Decade, New Approach Agreement.

Later this week the Foreign Secretary will be meeting the European Commission Vice-President Maros Sefcovic, in which rapid progress to remove the Irish Sea Border must be achieved. The support of Conservative MPs to ensure the Government imminently delivers upon its commitments would represent important progress.”