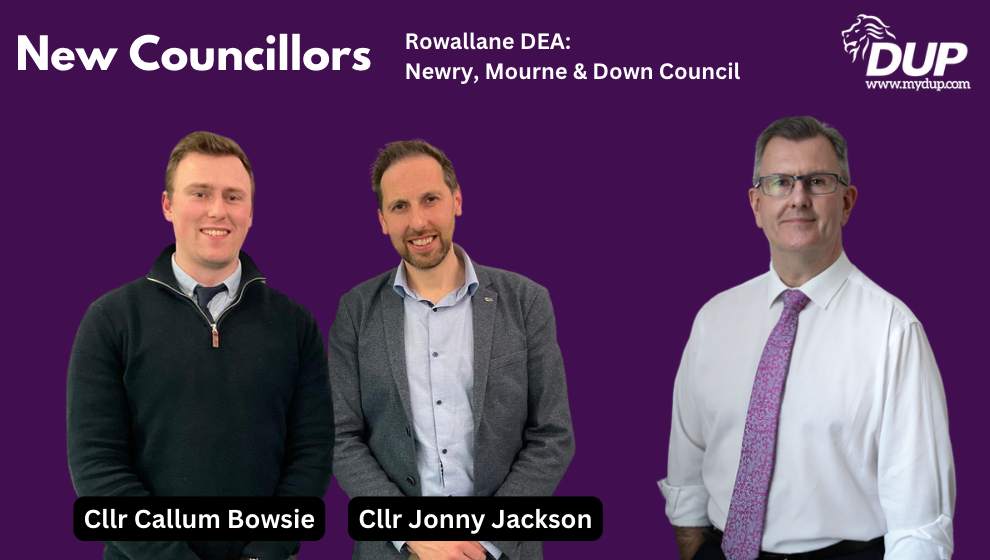 Jonny Jackson and Callum Bowsie will now represent the party within the area following the decision by the previous Councillors to step down.

“I am delighted that Jonny and Callum will be DUP Councillors for the Rowallane area. They will be determined, energetic and dedicated representatives for the people of the area. The party has been growing right across the Newry, Mourne and Down Council area and I know Jonny and Callum will be part of a strong team, working with Council colleagues and others at all levels of the party to deliver for the people of Rowallane.”

Cllr Jackson said, “As someone who was born in Crossgar and have lived here my entire life it is a privilege to represent the people of Rowallane. I have always been involved in the community and want to help deliver for them through Council. I look forward to being part of a strong DUP team in Council and continuing to deliver for the people of this area.”

Cllr Bowsie added, “I am delighted to have been co-opted as a councillor to serve the Rowallane DEA. Having been born and bred in this area, I have been involved in numerous community and church groups in Crossgar, Ballynahinch, Saintfield and Killyleagh from a young age. It’s a privilege to now be the voice of these communities in local government. I look forward to the challenge and working with my colleagues on council to serve the people of Rowallane and be part of a strong DUP team.”