East Londonderry MP Gregory Campbell has said that swift action on MLA pay is correct but stands in stark contrast to inaction on more than £10million of other allowances claimed by Sinn Fein MPs in the last 10 years alone. He said the figures demonstrate the government’s priorities. 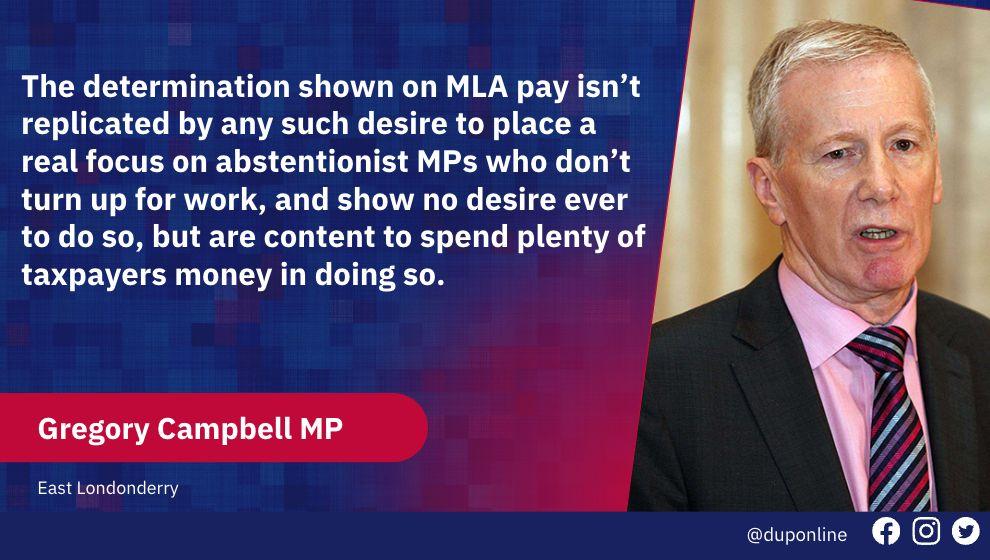 The DUP MP said, “The Government have taken action in relation to MLA pay, citing the fact that currently they are not carrying out their full duties. Whilst the Assembly is not sitting due to the Protocol introduced by this same government, it is evidence of their ability to act when they want to.

This swift action stands in contrast to other areas, including allowances paid to Sinn Fein MPs. Mary Lou McDonald has proclaimed that Sinn Fein has “no business” in Westminster, but with more than £10million accrued in ten years, Sinn Fein MPs certainly aren’t operating a charitable enterprise.

When I raised this £10million figure with the Northern Ireland Office Minister during the week he claimed that he didn’t “recognise” this figure. Perhaps that was because figures provided to be by the House of Commons Library show the total is actually greater than the £10million I cited. The representation allowance Sinn Fein receive was not only specially designed for the party but comes with less transparency and accountability than allowances paid to any other MP or Party.

Whilst energy support payments are being withheld by Ministers in London, there is no such holdback on Sinn Fein allowances. The determination shown on MLA pay isn’t replicated by any such desire to place a real focus on abstentionist MPs who don’t turn up for work, and show no desire ever to do so but are content to sown plenty of taxpayers money in doing so.