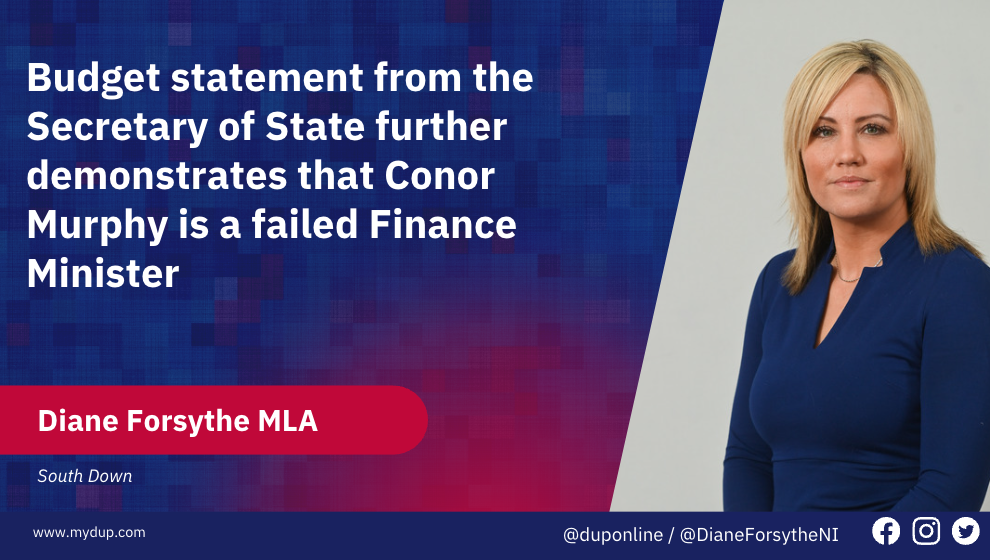 “This budget is deeply concerning for householders and the future of our public services not only this year but when we dig into the detail for the next financial year.

Only days ago, Michelle O’Neill said there were millions to “put into people’s pockets” if only Stormont was restored. The NI Fiscal Council soon debunked that idea by demonstrating the budget short-fall and today’s statement from the Secretary of State further demonstrates that Conor Murphy is a failed Finance Minister and Michelle O’Neill is talking baloney.

Murphy can throw blame around other Executive Ministers, but the core element of his job was to manage the money and he failed, and now tough decisions are being made in almost every department. Rather than helping Stromont Departments to deal with the Financial reality, Sinn Fein was feeding and creating a false narrative about our public finances.

Of course, it would be better to have a local Minister setting our budgets but when the Executive was functioning the Finance Minister drew up a Sinn Fein budget and failed to work with the other parties to get an agreed way forward.

Whilst the Secretary of State is swift to blame local politicians, he must consider shouldering some blame as the Trader Support Service set up to manage the NI Protocol paperwork is costing £12m per month. If the Protocol was replaced, then Stormont could be restored and that money would be better being invested in our public services.”