DUP Leader Sir Jeffrey Donaldson has told the Foreign Press Association in London that unless the Protocol is replaced by arrangements that unionists can support there is no solid foundation for Stormont. 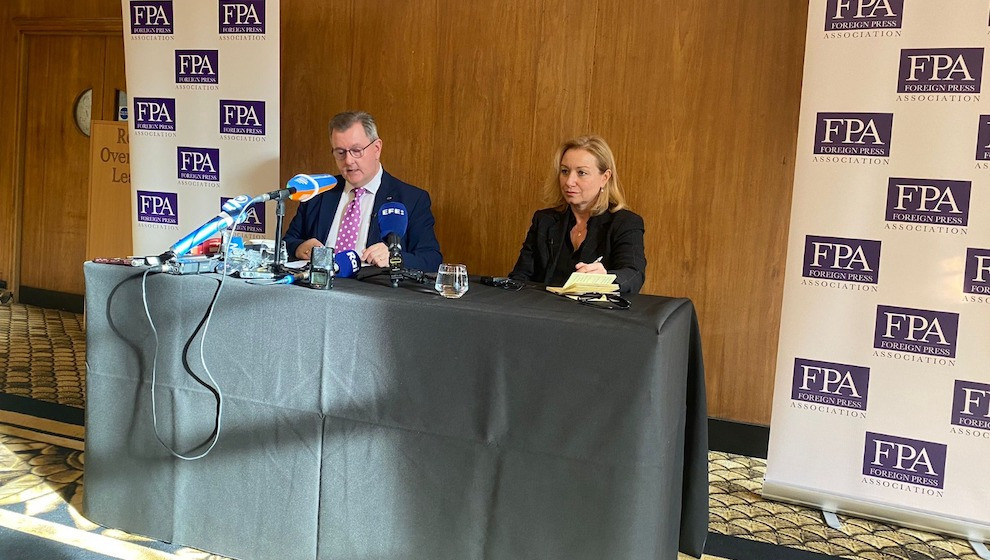 “In one hundred and thirty-three days, people in London, Belfast, Dublin and Washington will mark the twenty-fifth anniversary of the Belfast Good Friday Agreement. If the Protocol is not replaced with arrangements that both unionists and nationalists can support, then that date will come and go without a functioning government in Stormont.

The Belfast Agreement in 1998 was the start of a journey. Fully functioning devolved government struggled to really get off the ground until 2007. The reasons are complex but can be summarised in a simple analogy. The foundations were weak. It took almost ten years to underpin the foundations but twenty-five years on, the imposition of the Northern Ireland Protocol is eroding the foundations of Stormont.

Stormont cannot work without the restoration of the delicate political balance negotiated over many years. Progress in Northern Ireland has only ever been possible when agreements can command the support of unionists and nationalists. We had an election for the Northern Ireland Assembly in May. Every unionist MLA elected opposes the Protocol.

We have not arrived in this situation overnight. When the decision was made by London and Brussels to move ahead with the Protocol without unionist support, a delicate balance was upset and the long-established commitment to cross community powersharing was discarded.

After two years of repeated warnings, we withdrew our First Minster at the start of this year. For two years we had been urging the Government to get a better deal. This call was repeatedly rebuffed by the EU. We were told the Protocol was the only show in town and was not open for renegotiation.

To any neutral observer, devolution and the Protocol were never going to be compatible. Indeed, on a practical level, every day Northern Ireland is subjected to some new Protocol problem that bedevils a business or a consumer.

We want to work with others collectively so we can implement our plan for the health service and get on with delivering help for working families and creating more and better jobs.

But first we must secure the solid foundations for moving forward and clear away the debris of the Protocol years. We need to restore the cross-community consensus that is essential for the political institutions to function and to succeed.”