The DUP’s Lead Policing Board representative Trevor Clarke has said Court submissions on behalf of the Chief Constable in response to a legal challenge by two junior officers raise further serious questions regarding Sinn Féin’s influence over policing in Northern Ireland. 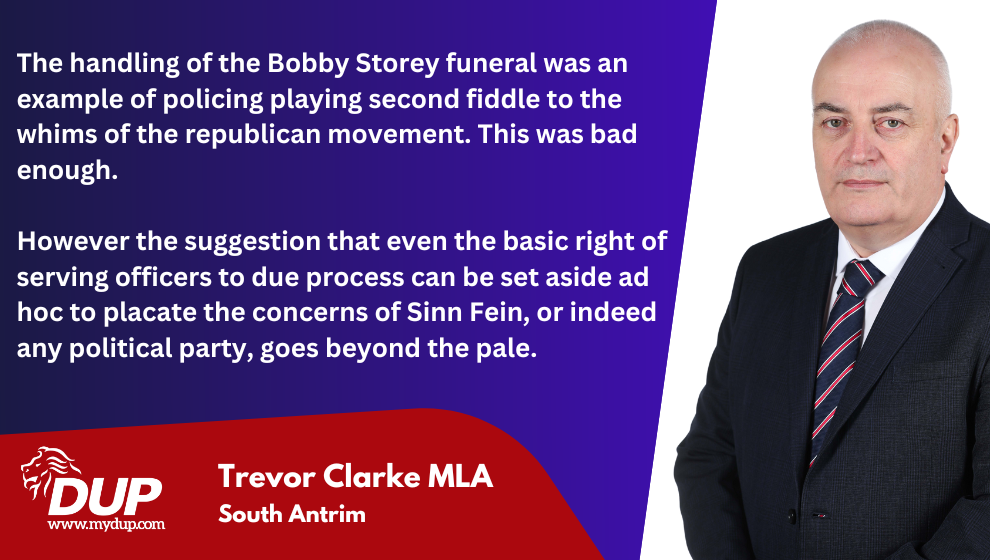 The officers in question were disciplined following the arrest of a man on suspicion of disorderly behaviour on the 29th anniversary of the Sean Graham bookmakers attack in South Belfast.

‘‘Despite the the frenzy whipped up by nationalists and republicans in the aftermath of this incident, there remains little to no evidence of wrongdoing on the part of these two officers.

One was a Protestant and the other a Catholic. Neither were neighbourhood officers with knowledge of the background to the event. They didn’t rush in but rather sought advice from their superiors and were advised in engage what appeared to be a clear breach of the law on permitted public gatherings at that time. The PPS later confirmed the officers would not be prosecuted in relation to the circumstances of the arrest.

These are the facts. There was no political bias in this police operation. However, from reading extracts of evidence submitted in defence of the Chief Constable in Court this week, it appears that such a conclusion cannot be as readily drawn when it comes to the treatment of these probationary officers.

Any inference that the decision to allow the axe to fall on these two young men was, at least in part, due to concerns raised by political leaders ‘up to the deputy First Minister’ is deeply disconcerting. The public interest test is not what Sinn Fein or the republican movement dictates it is.

The handling of the Bobby Storey funeral was an example of policing playing second fiddle to the whims of the republican movement. This was bad enough. However the suggestion that even the basic right of serving officers to due process can be set aside ad hoc to placate the concerns of Sinn Fein, or indeed any political party, goes beyond the pale.

The DUP stands with both officers impacted by this case. We also look forward to the conclusion of legal proceedings so there can be fuller, public scrutiny of the forces at play in the PSNI’s decision-making to date.’’