South Down MLA Diane Forsythe has challenged the Parliamentary Commissioner for Standards on the interpretation of rules which cloak the salary of Sinn Fein MPs in secrecy. 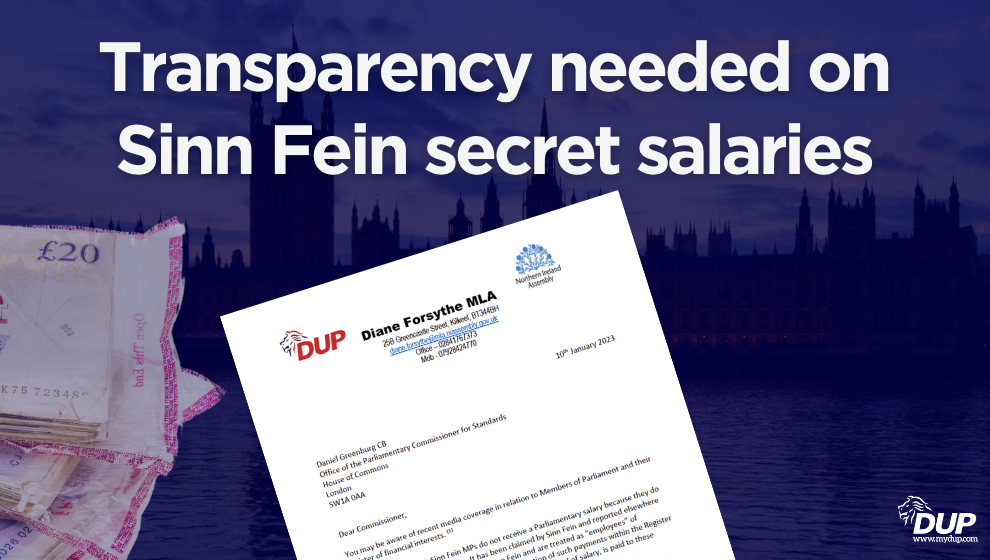 Following correspondence from the DUP representative the Commissioner recently confirmed that money paid by Sinn Fein to their MPs as a salary is not required to be declared on their Register of Financial Interests despite all other outside payments requiring such transparency.

Ms Forsythe has queried which rule details such an exemption on these earnings and whether it means any payment from the bank account of a political party to a Member of Parliament is exempt from disclosure.

Diane Forsythe said, “Sinn Fein MPs are the only elected representatives across the UK or Republic of Ireland whose salaries are secret from the public. The public can see and scrutinise the salary of every Councillor, MLA and all other MPs, with the sole exception of Sinn Fein.

If Sinn Fein pays the salary of someone working in an MP’s office then this must be declared in the Register of Financial Interests. However, the Commissioner has decided that a political party directly paying an MPs isn’t worthy of either the openness and accountability cited in both the Code of Conduct for MPs and the Nolan Principles of Public Life.

The very least the public deserve is an explanation as to why the Commissioner views such payments as not requiring registration, which rule details this, and whether the ruling means any payment from the bank account of a political party to an MP is exempt from disclosure.

We know there is no cost of living crisis in Connolly House. Sinn Fein is the richest political party on either side of the border and benefits from the dark money loophole which sees foreign donations able to influence politics in Northern Ireland when it is banned across the rest of the UK and in the Republic. There is a clear public interest in all elected representatives being subject to the same scrutiny of their salaries. This is only further heightened when they are members of a party which can receive significant foreign donations without any transparency on how this is used to influence our politics.”