The DUP’s Lead Policing Board representative Trevor Clarke has welcomed a major breakthrough in the fight against human trafficking across Northern Ireland. 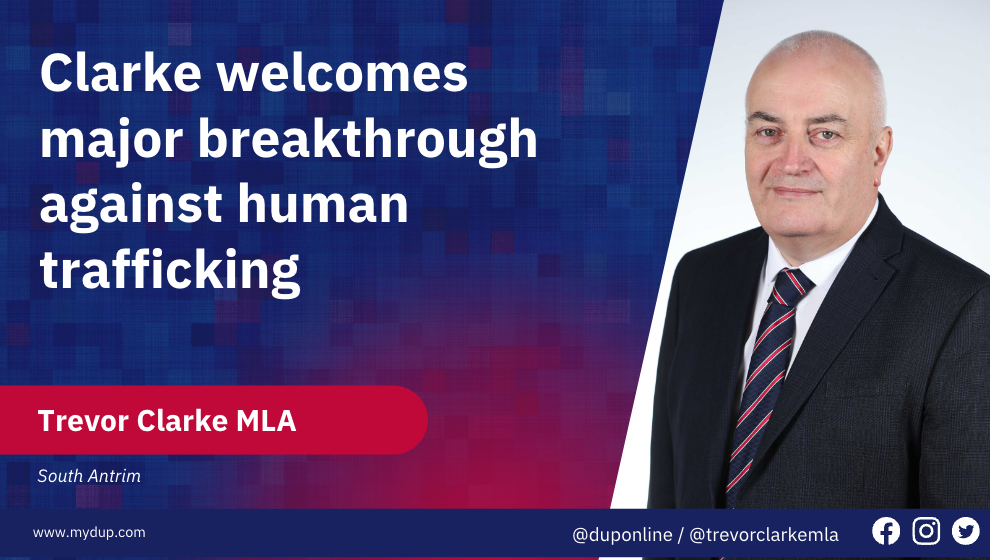 On Monday the PSNI confirmed that 27 brothels had been raided and a number of individuals arrested in the successful operation, which was supported a by a range of criminal justice partners.

‘‘This is an extremely welcome development and I commend the PSNI on a successful and professional operation.

The scale of sexual exploitation in this case will come as a shock to many. Indeed, it reached almost every corner of Northern Ireland. This underlines why victims of modern slavery are often described as being hidden in plain sight. Police enforcement alone will never be enough. Public awareness must be transformed if we are to prevent harm and ensure earlier intervention.

For the countless vulnerable individuals preyed upon by this organised crime group, this breakthrough provides a platform to rebuild their lives. It is crucial that they get the support they deserve. As a Party, we successfully campaigned to ensure the Justice Bill passed by the last Assembly included a statutory commitment to provide tailored support to slavery victims for up to 12 months, and longer, where necessary. This will be critical to ensuring the risk of re-trafficking is mitigated.

The 2015 Human Trafficking Act spearheaded by my colleague Lord Morrow set the standard for how we crack down on those criminal gangs who promote and profit from sexual exploitation. It is encouraging that policing outcomes now starting to reflect that vision. However, there are elements of the legislation that remain outstanding and these need to be implemented in full if further ground is to be taken in the fight against modern slavery. We will continue to press for the Department of Justice to address these issues and build on the firm foundation provided by recent policing operations.”