The DUP’s East Belfast MLA David Brooks has written to the GAA’s Ulster Council asking for a clear statement as to where the organisation stands on pressing for a divisive border poll after social media posts have been published of GAA member Niall Murphy saying that the GAA is “uniquely placed to not only contribute but actively support calls for a border poll.” 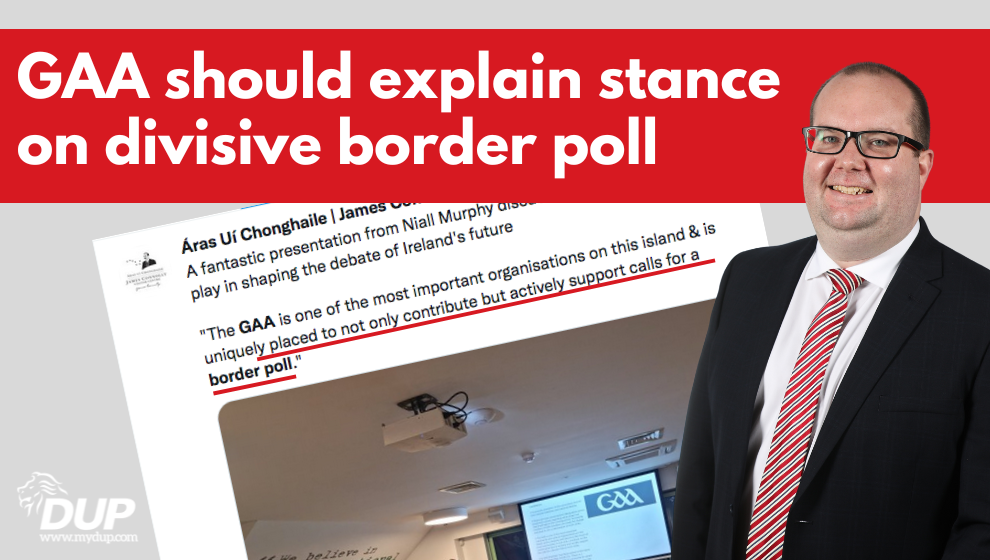 “This statement by Niall Murphy requires a response from the GAA leadership. The GAA makes no secret of its political aspirations but to have the organisation across hundreds of clubs campaigning for a divisive border poll would hugely divisive and completely abolish the idea of it being purely a sporting body.

“Since she has not control over all the national territory, Ireland’s claim to nationhood is impaired. . . . The Association is a National Organisation which has as its basic aim the strengthening of the National Identity in a 32 County Ireland through the preservation and promotion of Gaelic Games and pastimes. . . . Membership of the Association shall be granted only by a Club, to persons who subscribe to and undertake to further the aims and objectives of the GAA.”

The GAA is not inclusive for anyone who believes in Northern Ireland remaining part of the United Kingdom. No unionist could subscribe to such anti-union aims and therefore no unionist could be a GAA member.

Besides the constitution, the GAA has also a litany of examples where Republican terrorists have either competitions or medals named after them and even monuments in GAA grounds for convicted terrorists. On top of the links to republican terrorism, a leading role in border poll campaigning would exclude unionists even further and call into question public funding for the GAA.”