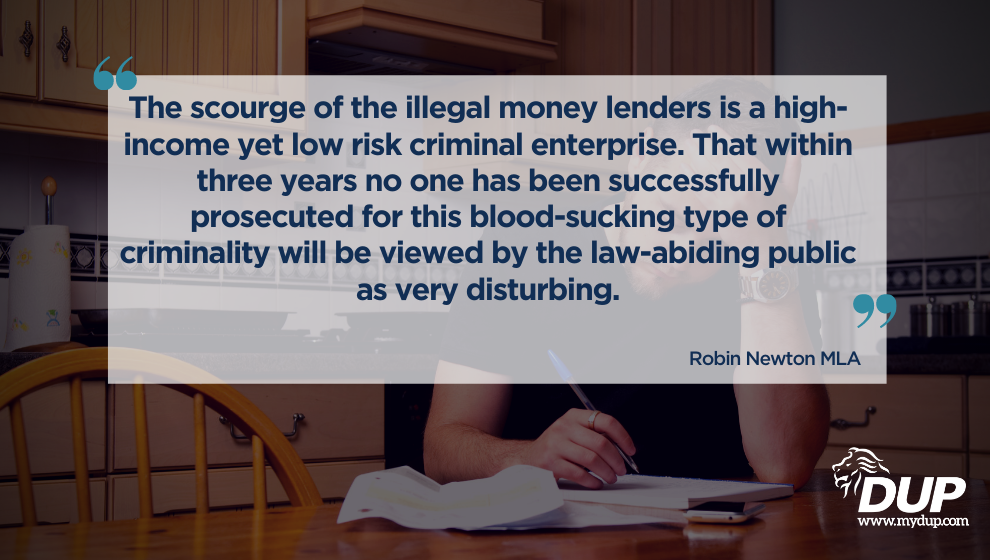 The Justice Committee member said, “The scourge of the illegal money lenders is a high-income yet low risk criminal enterprise. That within three years no one has been successfully prosecuted for this blood-sucking type of criminality will be viewed by the law-abiding public as very disturbing.

The Justice Minister recently launched the 'Ending the Harm' campaign aimed at highlighting the dangers of illegal money lending and the paramilitary gangs who engage in this crime and exploit vulnerable people.

The campaign to raise awareness and to signpost help for people affected is worthwhile, but there is also a need for action to be stepped up in terms of a strategy to actually put those responsible for this crime behind bars. Part of that obviously does require dealing with the fear felt by those who have been affected but are unwilling to even report the crime.

I would encourage the Justice Minister to develop a specific focus on this crime, particularly given the stark fact that no-one has been prosecuted within the last three years. This should happen urgently given the huge impact it has on people who are already struggling to get by.

It is an evil and menacing aspect within society that a video campaign will not stop. The Minister needs specific and targeted police action to arrest the thugs bleeding dry those least able to defend themselves."